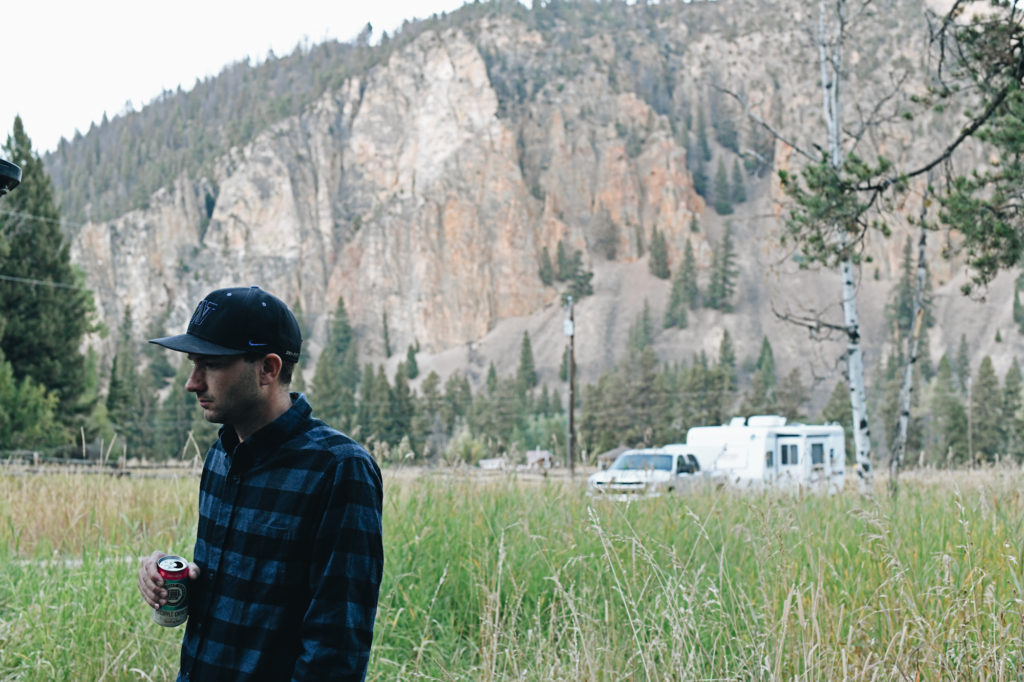 Nate: “Montana in Sept this year?” Me: “Yes. I’m not kidding. Please make it happen.” Four men, friends for years and all facing the realities of their mid thirties have made the pilgrimage the past few years to fish in Montana. They rallied their budgets, vacation time, and hall passes at home to get away to what has been coined by outdoorsman as, “the last best place”. This year, they invited me to join them. I’ve fished Montana only once before, a paid-for invitation I accepted in exchange for playing music in the evenings of a lodge on the Clark Fork. It was a highly organized trip with detailed itineraries and agendas for each day. Logistics and well-laid plans are key to a great trip. In the months leading up to this trip out, the text thread remained sparse and very few details were discussed. I couldn’t figure out if I should attribute that to the bulging confidence of the guys I was joining, or that fate would draw these seasoned friends together without a “detail oriented” chap among them. In any case, the countdown continued and I nervously tried to figure out the plan. I had never done a fishing trip quite like this…no lodge, no cabin, no AirBnB. How were we going to fly and tent camp and fish? Many standard camping items aren’t the kind of things the diligent TSA wants to see on a scanner. Finally, an 11th hour rally divvied up the responsibilities as well as the shopping we’d need to do once we landed in Missoula. We’d stop at Sportman’s Warehouse, and grab some basic groceries for breakfasts and snacks on the trail, but one item stood out on the list as most important to me: bear spray. 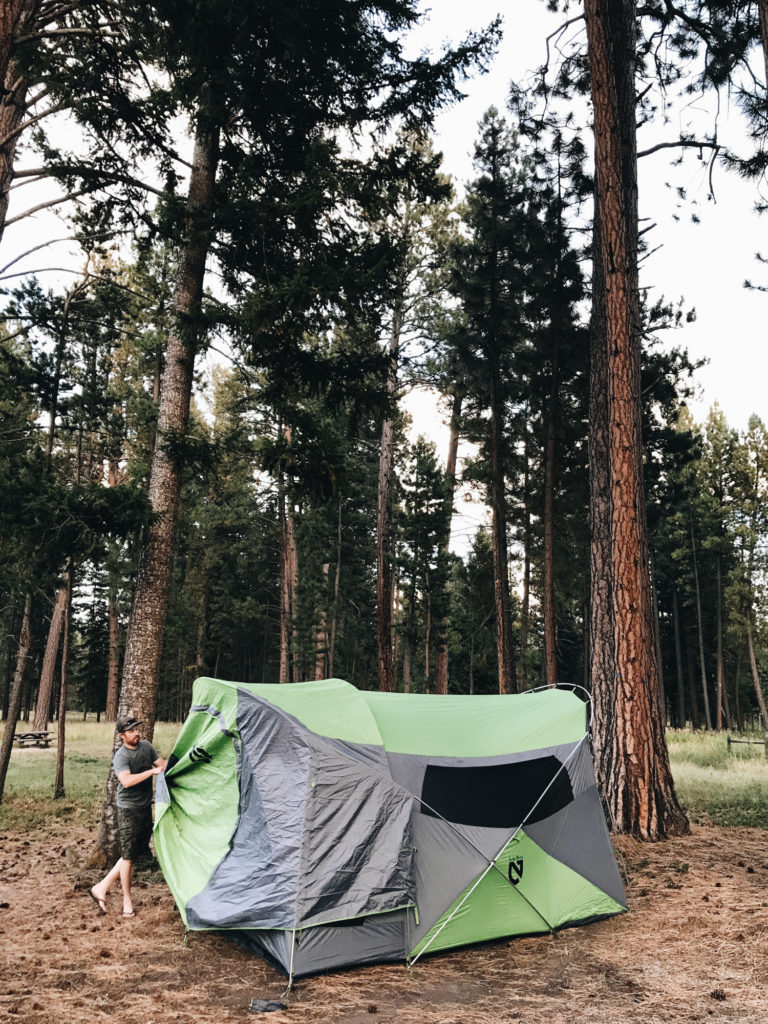 Like any sane person I scoured the internet for anything I could learn about bear protection. I even kicked around the idea of picking up a 10mm Glock or .454, but after a laughably heated discussion on an online hunting forum, I opted to stay with the spray. The advice was mostly consistent: make lots of noise and stay in areas with good visibility. A guide friend in central MT had mentioned to me that this year’s bumper crop of choke cherries and other berries were of particular interest to the grizzly bears. 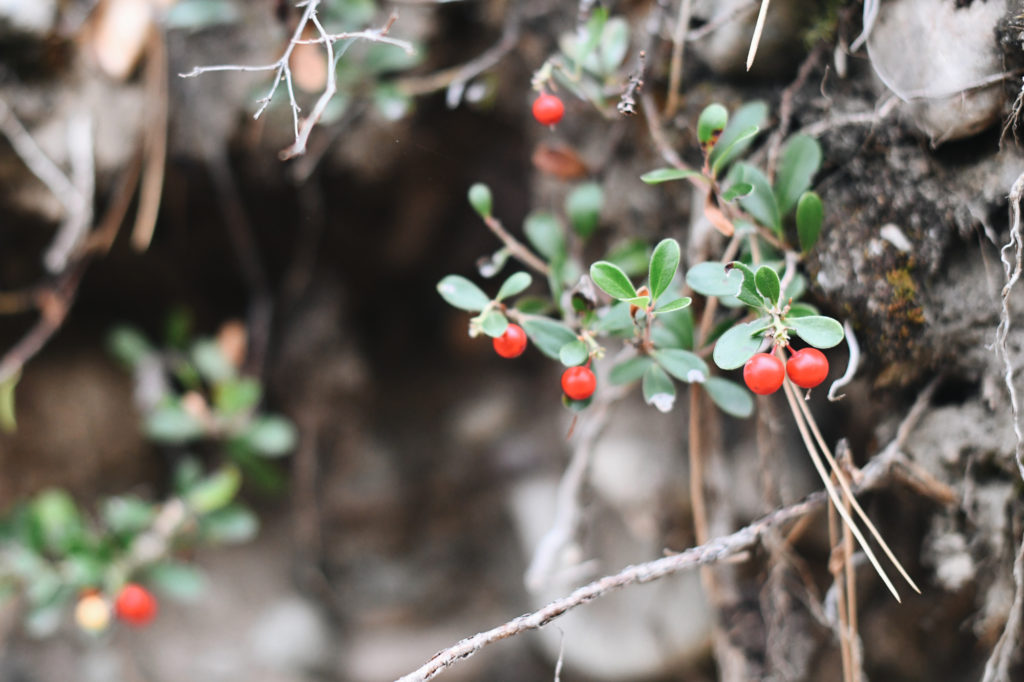 Three of us landed first and broke for Missoula driving east along the Blackfoot River towards the town of Lincoln (the epicenter of an infamous FBI investigation in 1996) where’d we make camp, watching out our windows for an access point near the highway that seemed enticing. From the road, the river was underwhelming. Most stretches seemed low and slow with very little visible habitat. It didn’t seem like it would hold many fish or be worth the effort. We tried a stretch of water anyway and soon learned this was not the case. 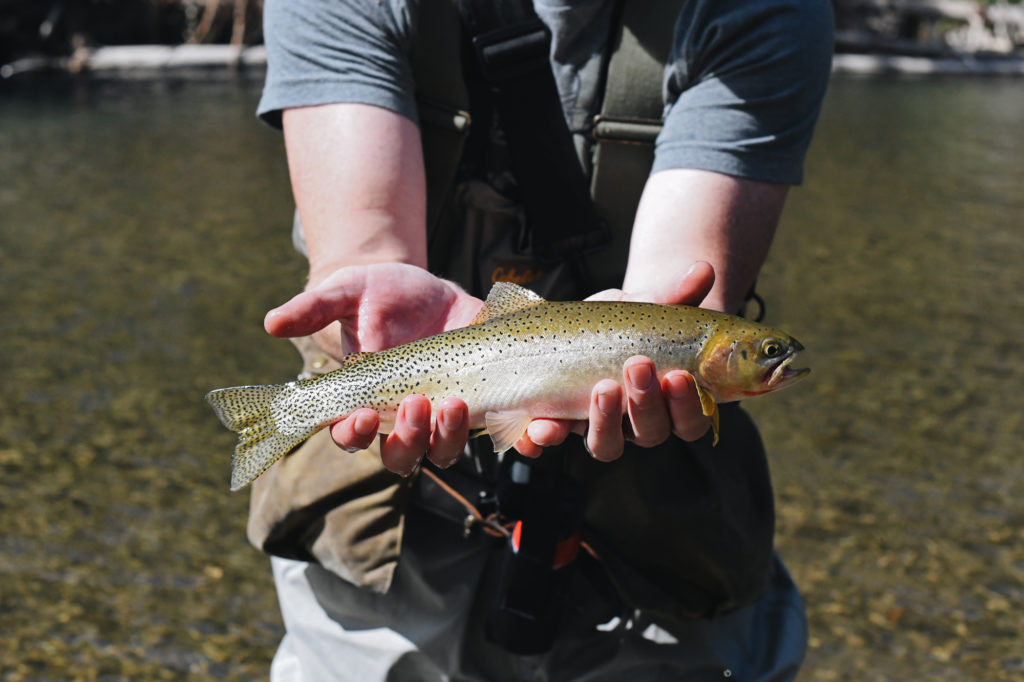 Elliot started off slow then slayed the rest of the trip. 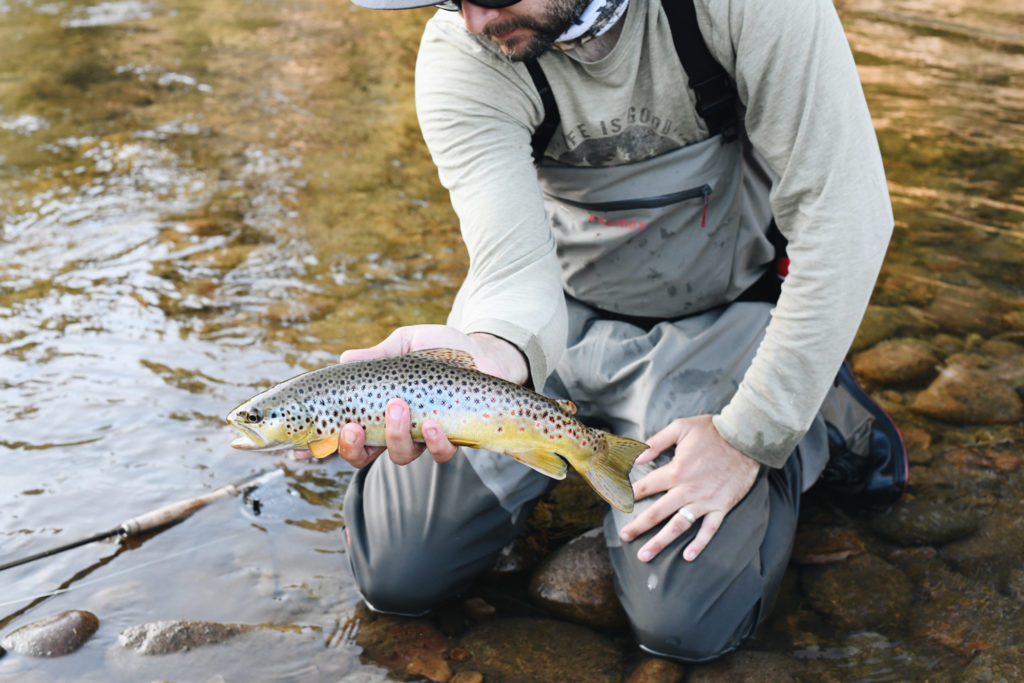 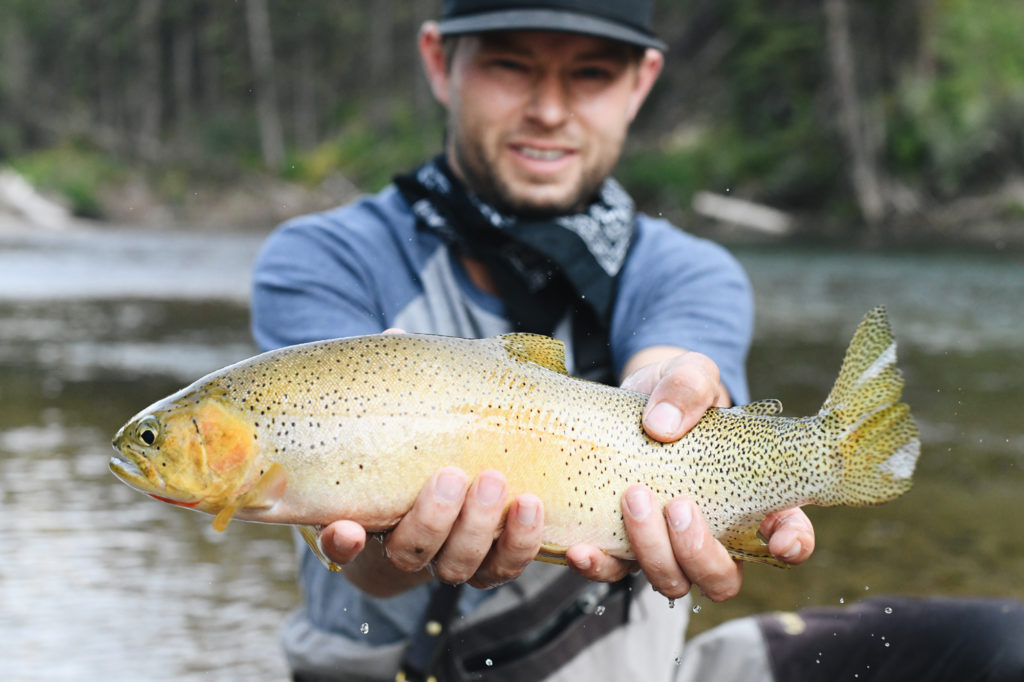 Zach with a stout cutt.

The Blackfoot is an incredibly diverse river. Multiple stretches differ greatly in topography, sediment, fish populations, shape, and approach. We tried three different sections, and only the gazetteer in the car would tell you that they were all the same river. Some parts were sandy and full of cutthroats, other parts carved their freestone bottoms through massive canyons and hosted bull trout (which the bulletin boards on the hike in reported were illegal to target). Despite the diverse features of the river, two things remained consistent in every location: 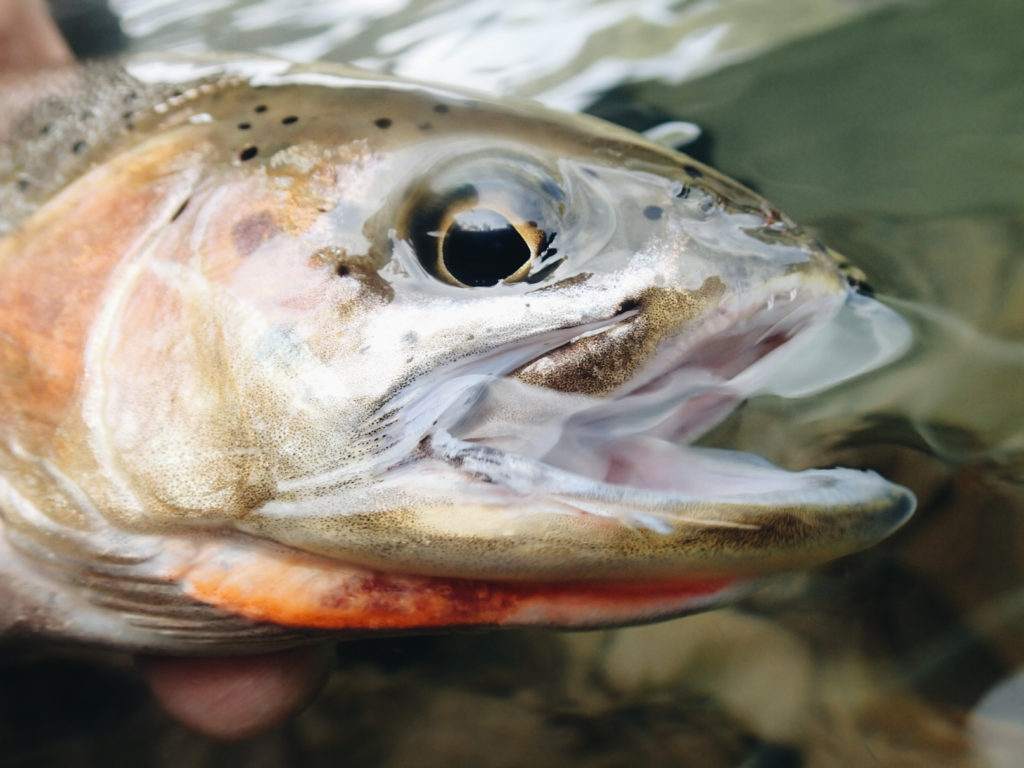 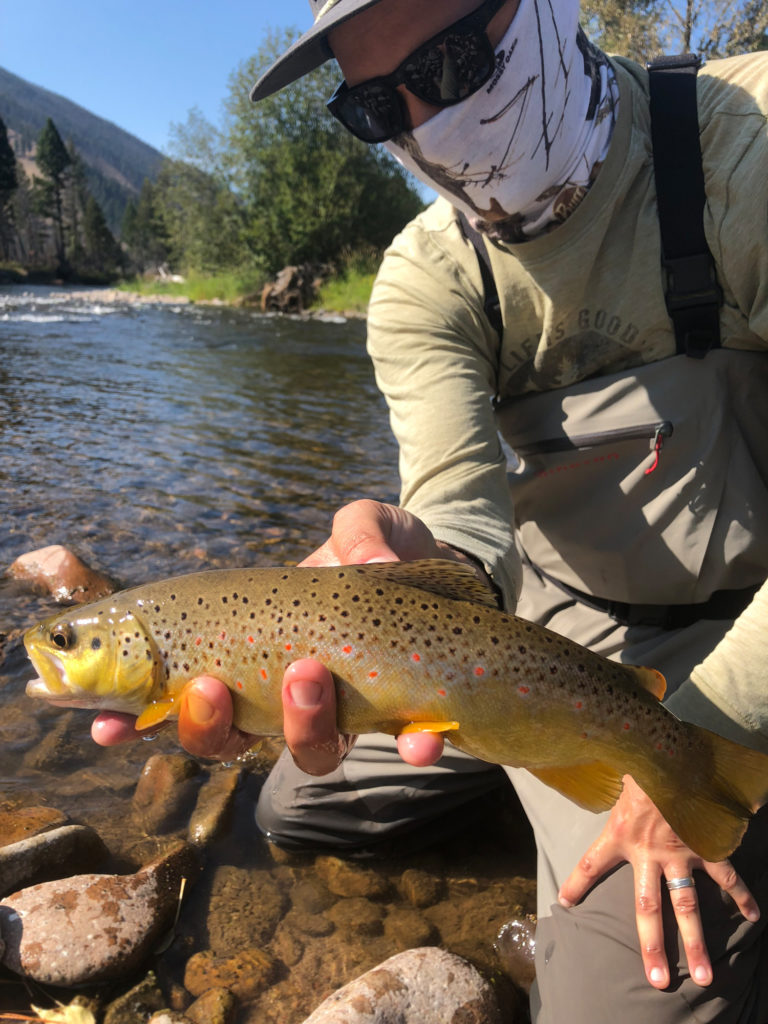 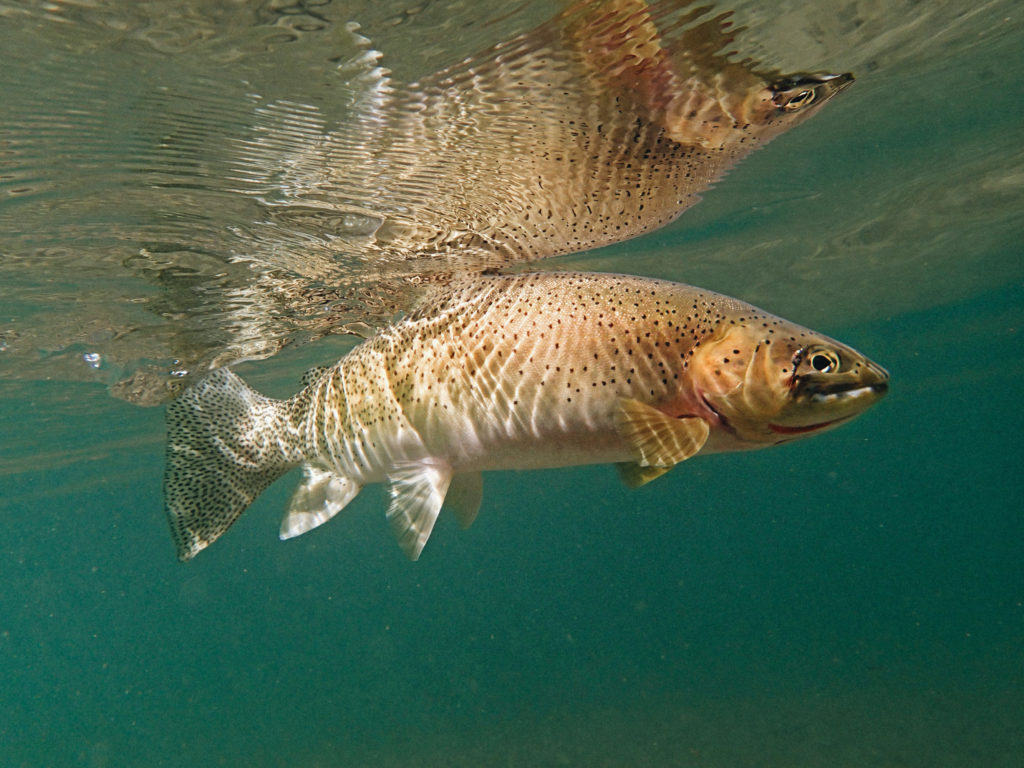 Nymph in the corner. 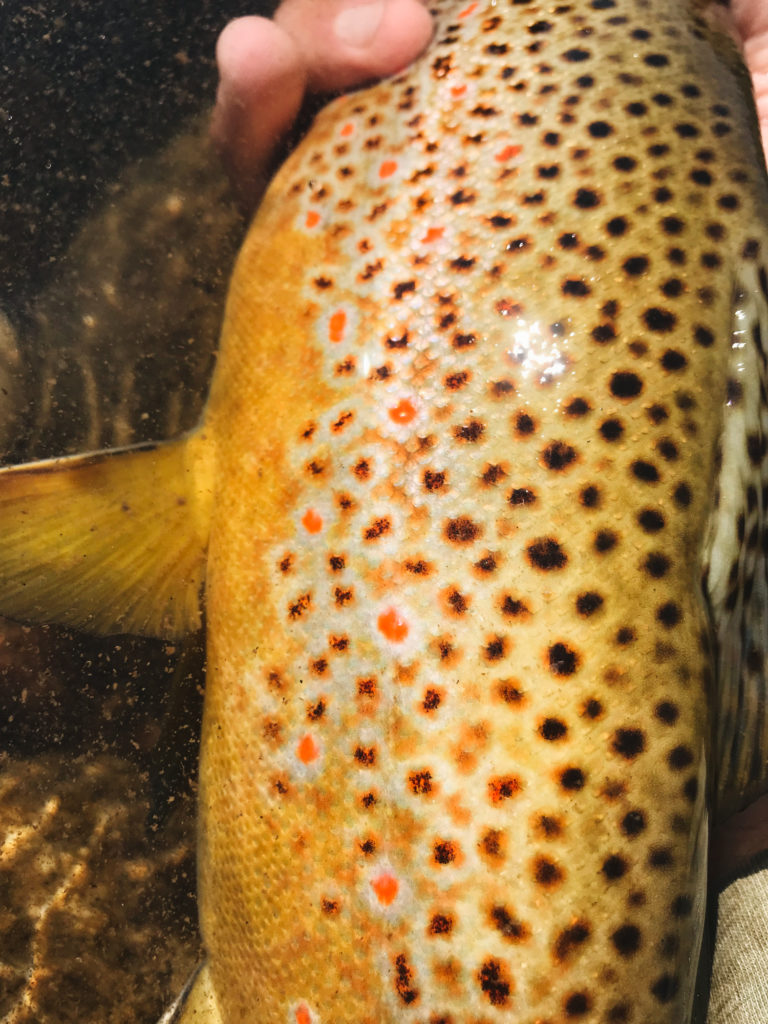 The late evenings were a time to recount the day around the fire, discussing lessons learned and tactics for the following day. An average of 6 miles each day of submerged wading and trail hiking wore me to exhaustion. Despite opting to not bring a pad, I slept hard on the unforgiving forest floor. 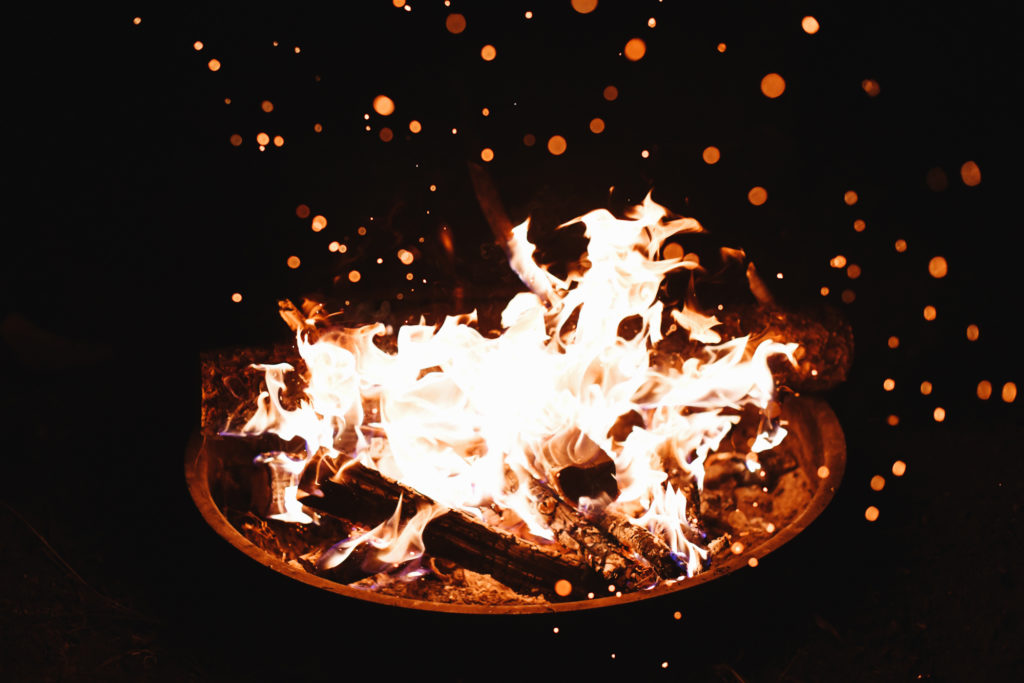 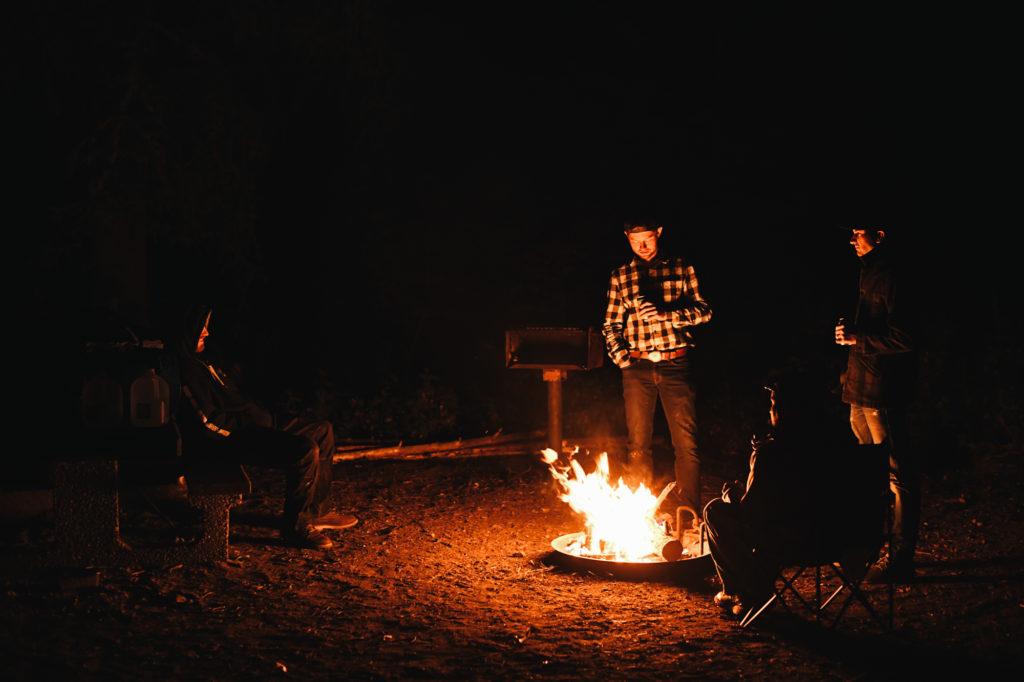 On the third day, we packed up camp and prepared to head south. Before we left, I convinced Nate to join me in exploring some nearby water that my fishing guide friend had mentioned as being worth our time. We followed his directions to the letter, but when we saw how low the water was, we immediately assumed that we had missed a turn. I re-confirmed with him our location and decided that we had to try to fish it, despite the visual evidence that it would be a bust. In the distance, I heard occasional rifle shots and a hunter crooning out elk calls in hopes of luring an interested trophy. Hiking at a quick clip for 30 minutes, I couldn’t find a single run that was even fishable, much less anything the locals would want to keep to themselves. Discouraged, I began to retrace my steps back to the car, following the border of the dry river bed on one side and the brush, thick with ponderosa pines and aspens on the other side. Suddenly the vegetation 20 yards in front of me rustled, and I watched as the tops of the six foot tall shrubs and grasses swayed. Something big was there, just out of sight. I released the Velcro safety strap on my bear spray, held my breath, and froze mid-stride.

After ten seconds of eternity, the leaves rustled again. Atop the six foot grasses, I made out the tips of an elk’s rack. I never sighted his body, but could deduce that the animal beneath those antlers was probably exactly what the hunter less than a mile away was hoping to stock his or her freezer with. I briefly followed the antlers with my eyes, swaying slowly atop the leaves of the young trees and massive reeds, unhurriedly moving deeper in to the brush. We jumped back on the road, and caught up with the rest of the crew for a brief stop on Flint Creek. This was a intriguing water that winded through agricultural fields, flat and open, seemingly too small to be worth the effort. Once again, appearances were deceiving. Every deep bend had driven the water to forcibly carve a slot in the muddy gravel beds. Add to that the discolored flows and you had perfect cover for trout. 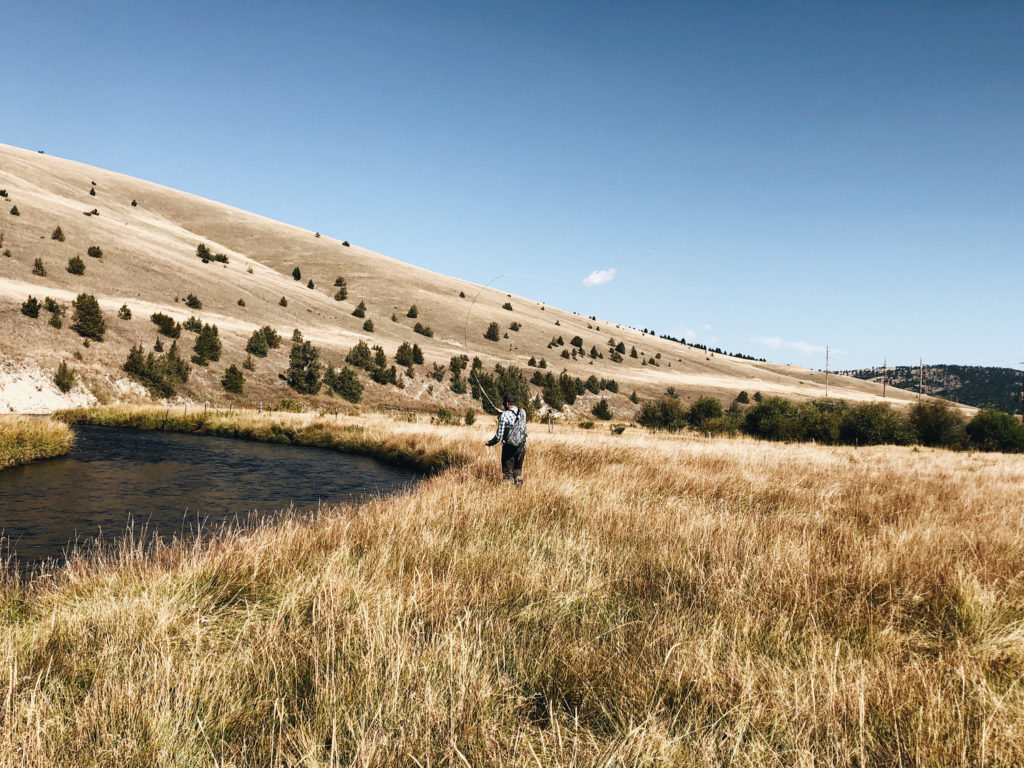 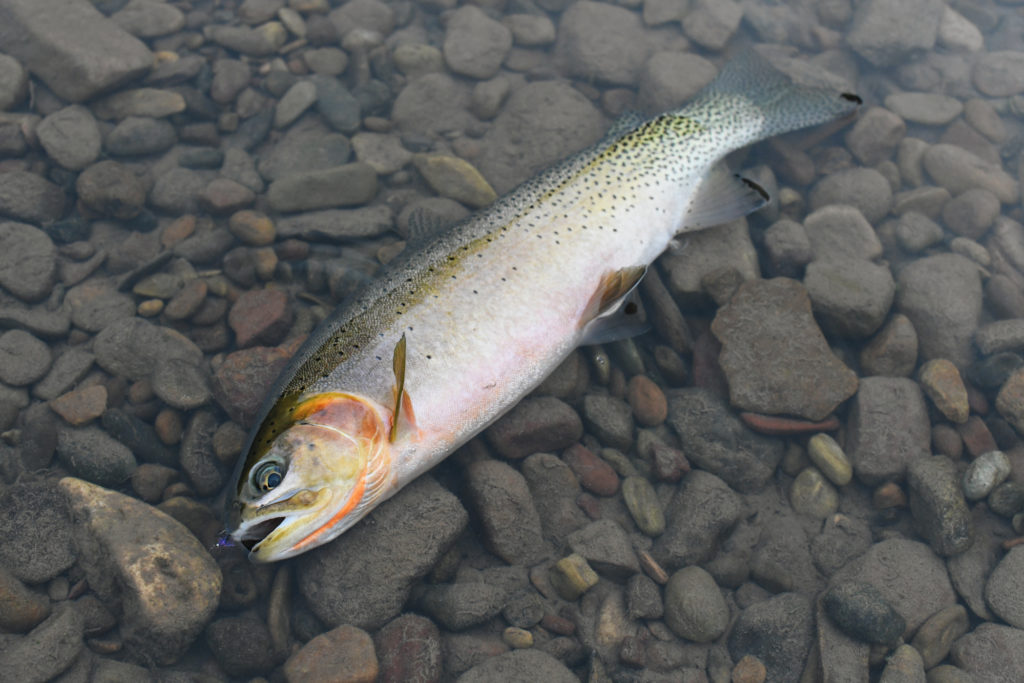 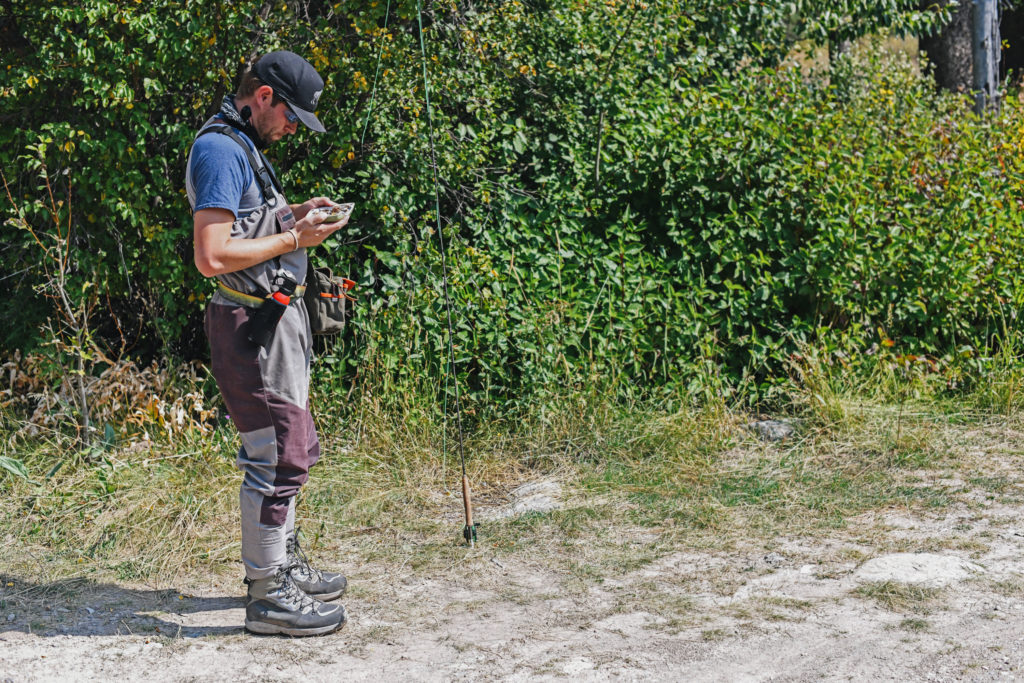 People in western Montana are a balanced blend of pleasant and indifferent. We saw it over and over again, every pub and diner, shop and trail. A conversation with the waitress in Phillipsburg revealed that 80% of business downtown was from tourists in the late summer, but that in winter that number flipped. Like many places that rely on tourism dollars, there was an undertone of dissatisfaction in her voice. As though the series of decisions to make Montana a tourist destination were disconnected from the desires of the people who call it home. I got the impression she liked this sleepy town just fine, with or without the visiting outdoorsman swapping stories across her bar-top. 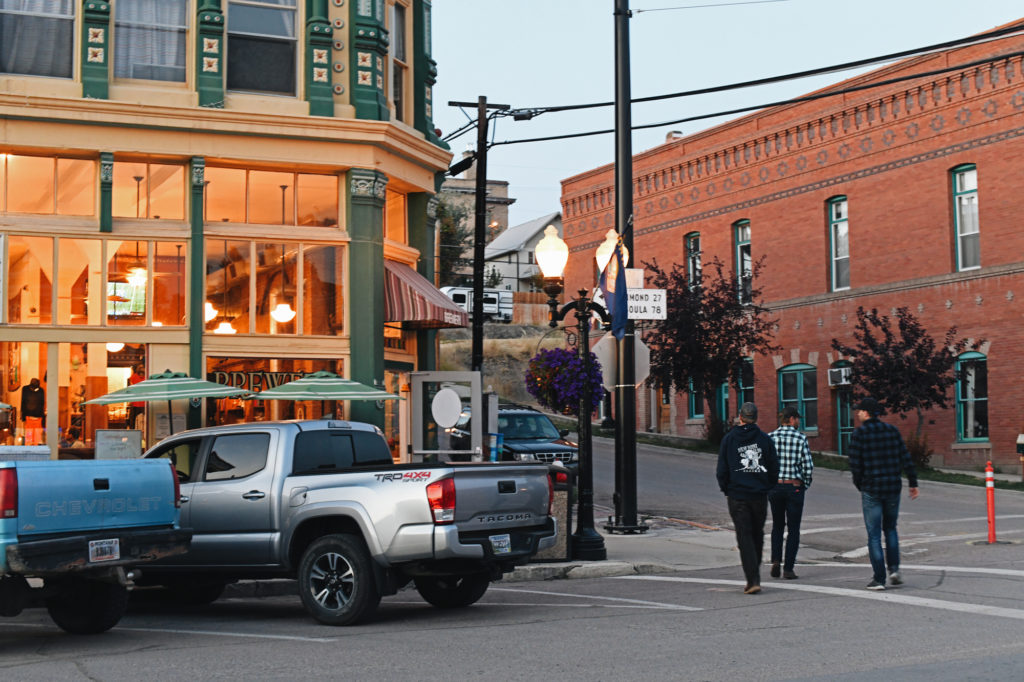 We’d spend the next two days fishing various parts of Rock Creek. Like the Blackfoot, different stretches looked incredibly different than what you would see a mere 10-15 miles up or downstream. Different sections fished differently, and the combination to the lock changed with each stop. Truly deep runs were few and far between so even when they appeared inches from the road, I couldn’t resist exploring the bouldering buckets. I adjusted my rig and pulled a few nice fish out. 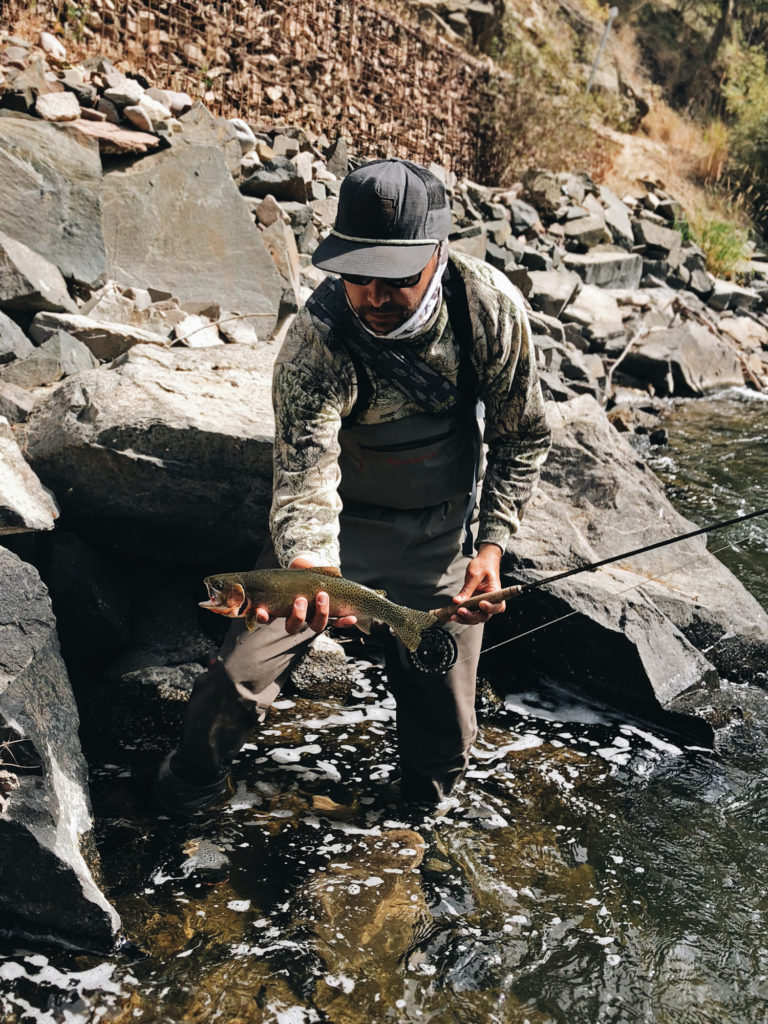 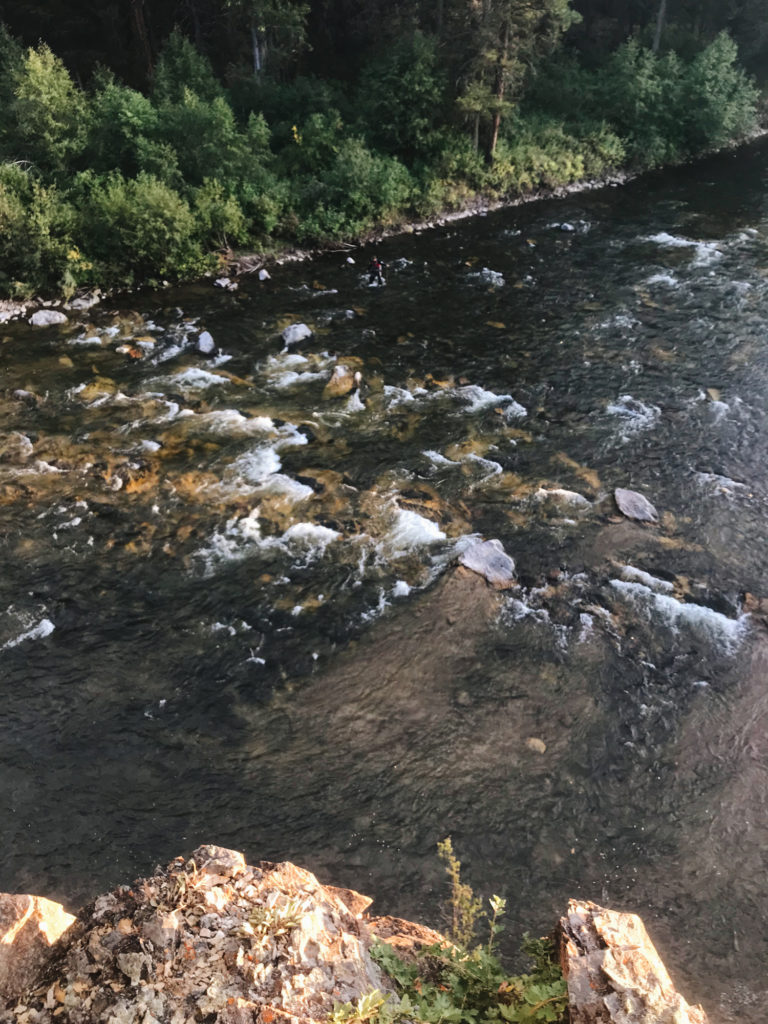 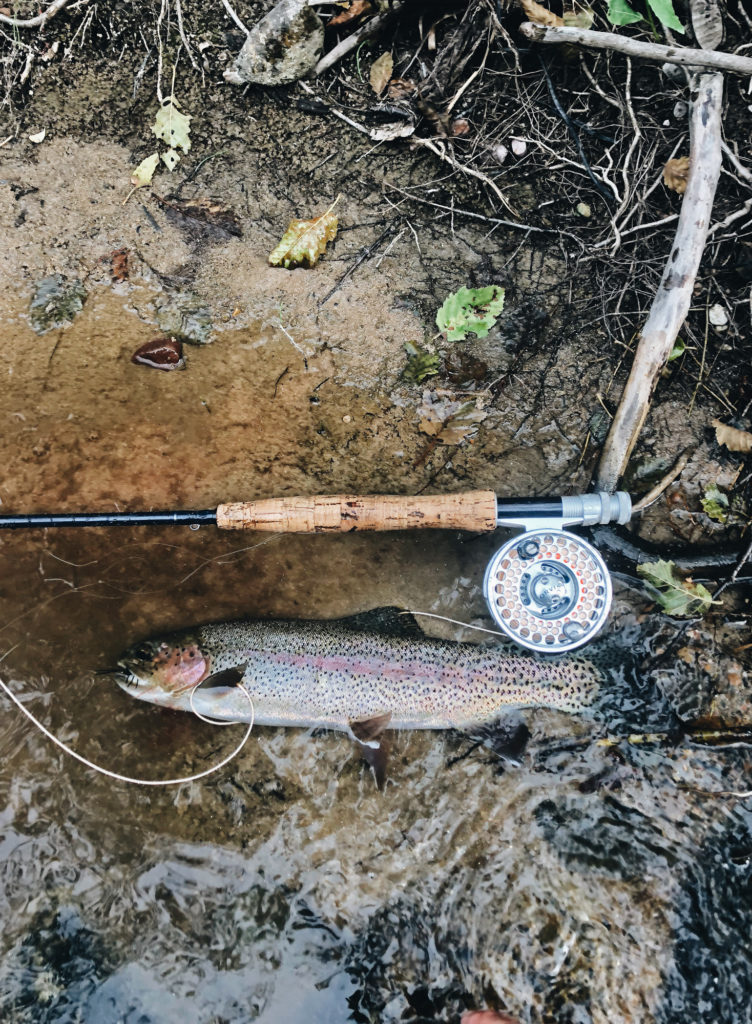 We encountered a ton of wildlife over the course of our trip. Elk, deer, frogs, snakes, sheep, eagles, beaver, and more. One evening along a dusty gravel road in the cars, I sighted a grizzly 10 yards from us out the passenger window. I yelled for the driver to stop, but in the time it took us to do so, the car behind us watched the bear turn and bound deeper into the treeline. I wanted a photo. He, apparently, did not. 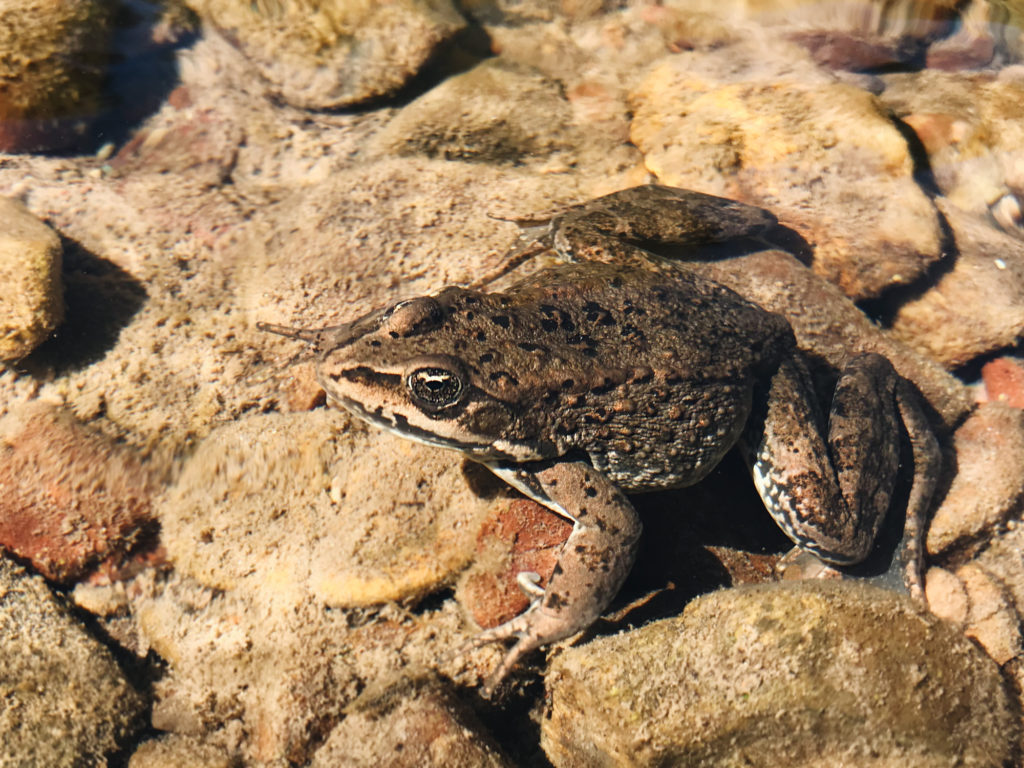 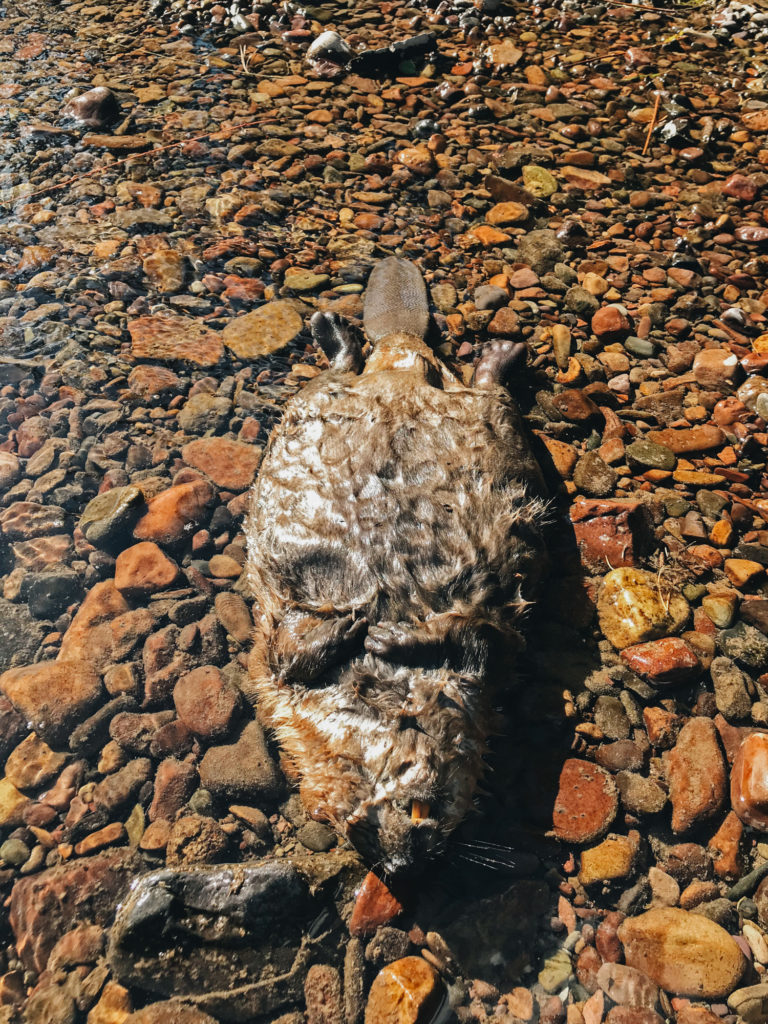 Mom appeared to be poisoned. Baby was sputtering around the nearby stretch of water looking concerned. 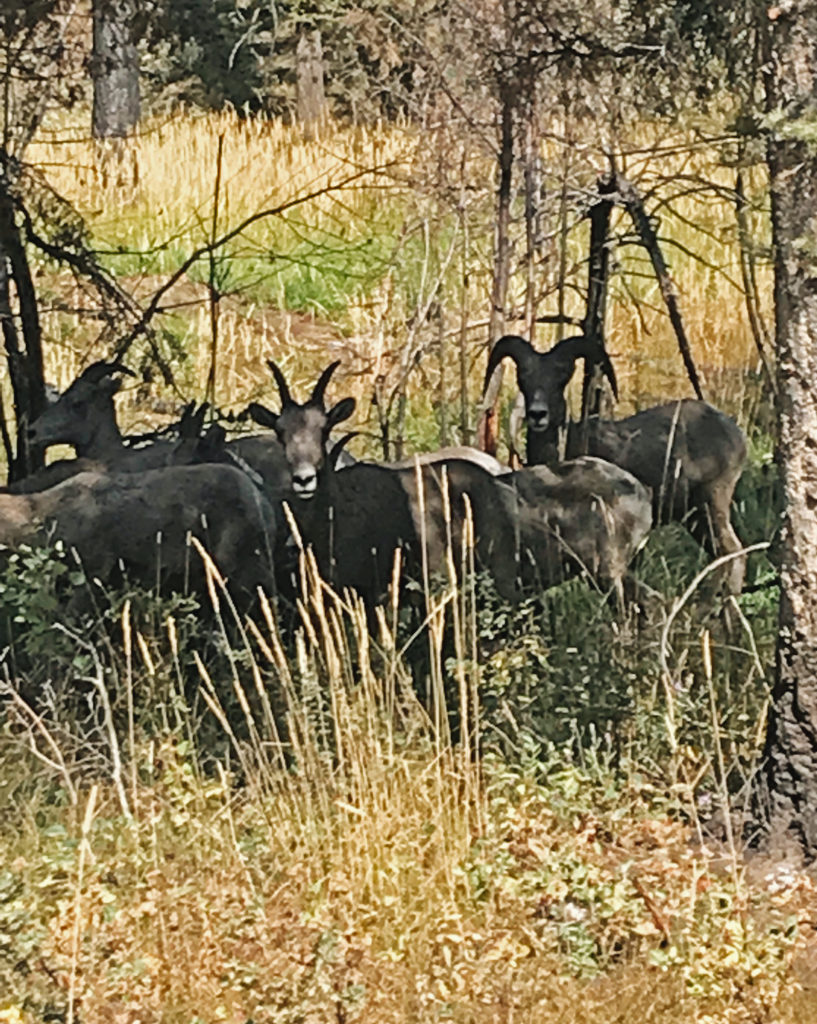 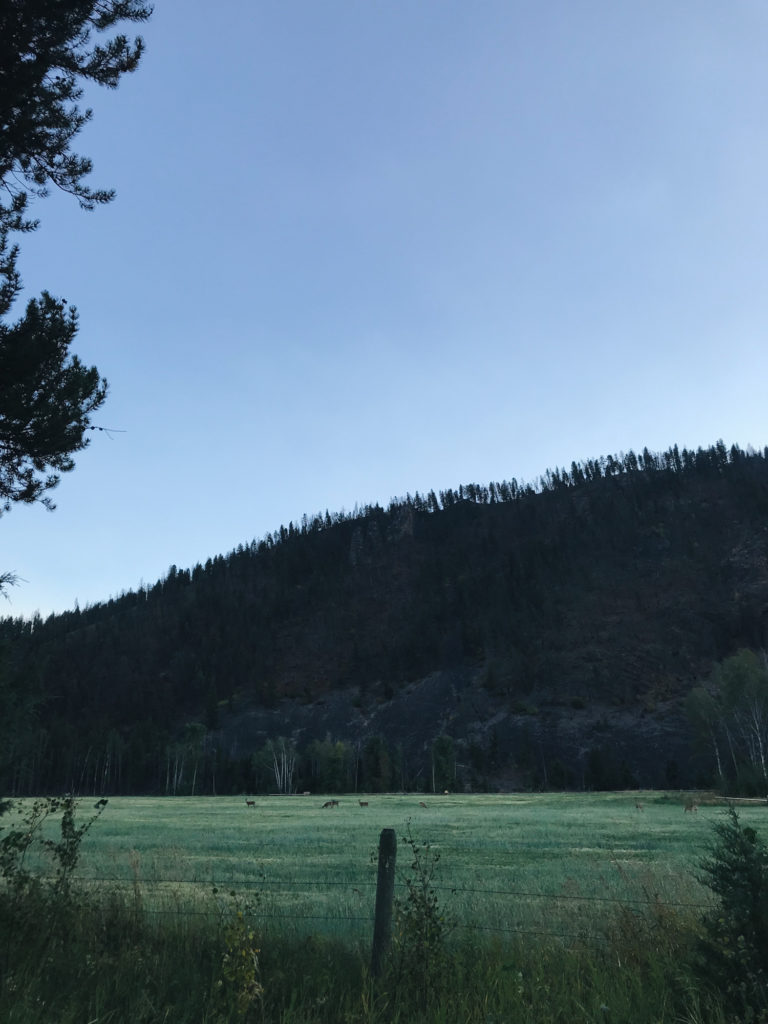 Every meadow was full of these.

On one of our last outings on Rock Creek, I encountered a weathered and spry old woman hiking out of the canyon. About 5′ 10″, shoulder length white hair, with a tiny braid falling over her Native American necklaces drooped around her neck. With a flyrod in one hand and a wading staff in the other, she had just finished fishing the river in the rocky canyon just upstream of us. This woman embodied the pleasant indifference I encountered in most locals; willing to answer a question or two but just as pleased to pass you on the trail without a word. I asked her a few questions, carefully reading her face and tone, imagining how she’d make short order of me with her wading staff. She patiently  spoke of the changes she’d seen in the valley, the legends of massive bull trout chattered about between “old timers” (she was pushing late 60s so do the math), and how the best fishing she’d ever experienced on the river was several years back when wildfires had closed the whole area to the outside world for almost six weeks. I mentioned that great fishing was available back home in WA but that it required a few hours of traveling in any direction. She smiled wryly and replied, “that’s how long it takes me to get to the grocery store”. 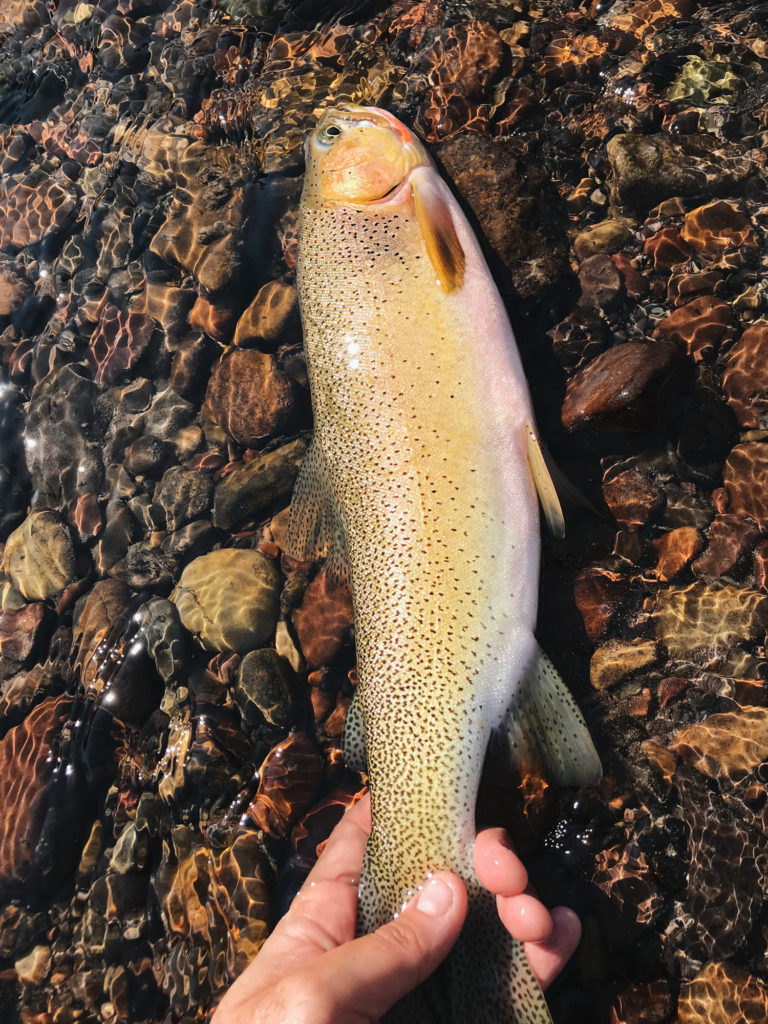 Quick picture before the send back.

As we parted and I began to plan my approach for the water ahead, I realized that the run she was just fishing was only accessible from a precarious rock face (see below), impressing on me further that the grit and toughness of Montana had left its mark on her. The cliff formed a perfectly vertical face below the surface and it was as deep as the river was wide. I managed to find a few cutthroat and a beautiful bull trout, both requiring a change of presentation and fly selection. 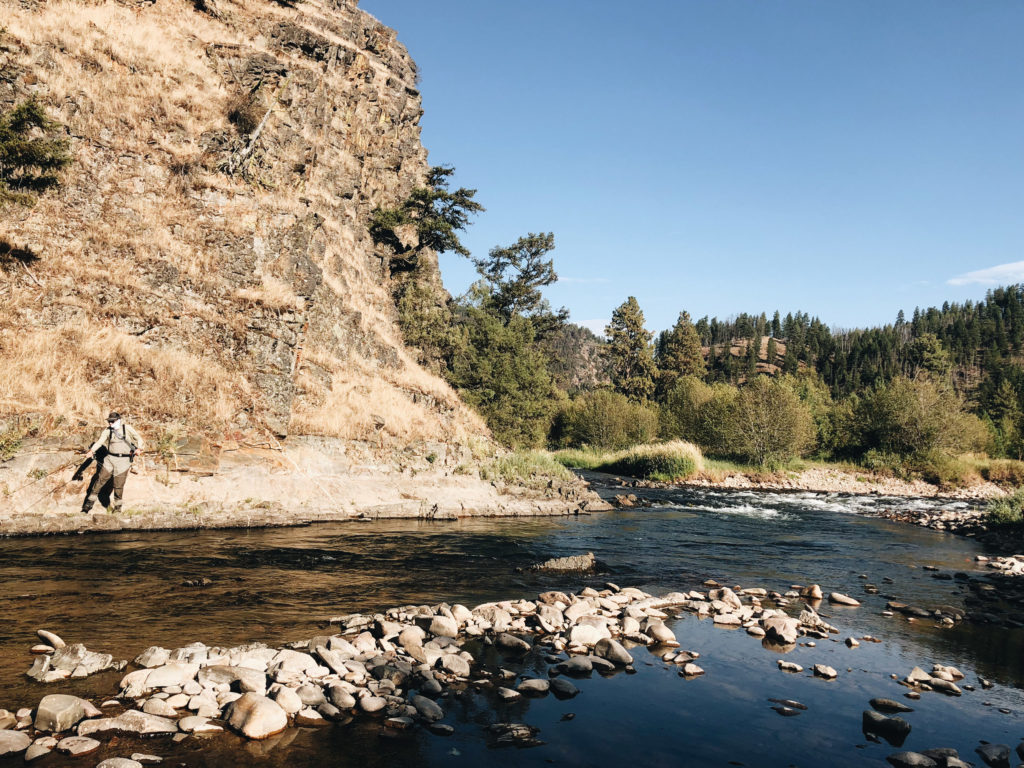 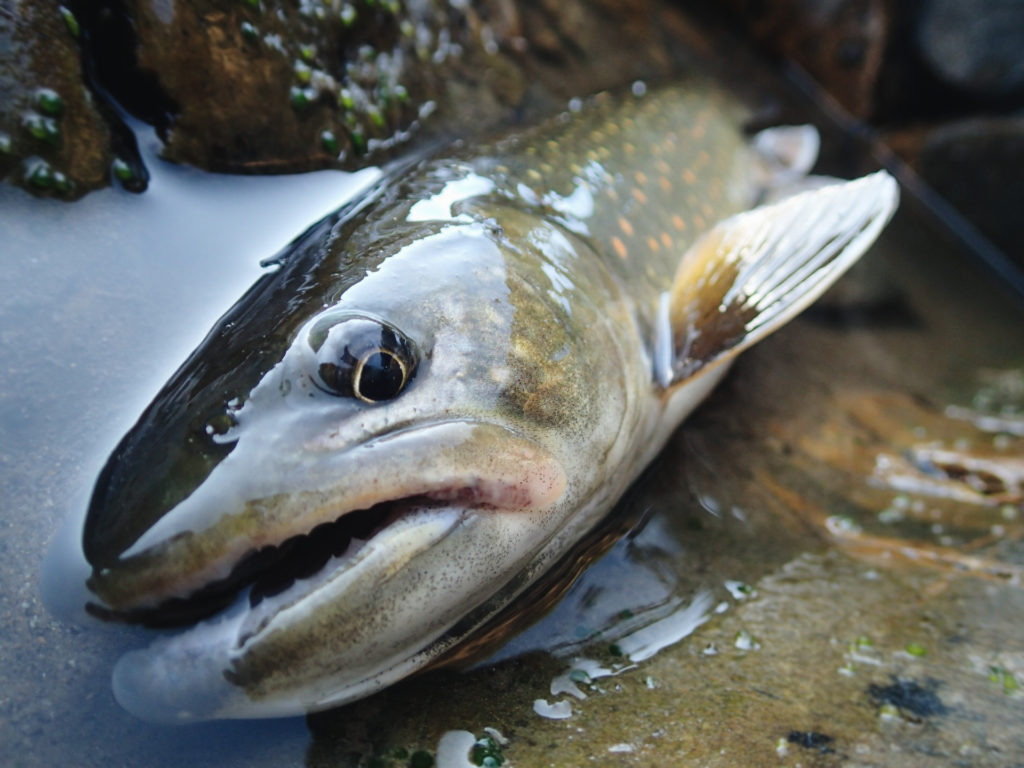 Bulls are a blast.

As the sun tucked behind the ridgeline to the west, we began our hike out. In the distance up ahead I saw movement, weaving through gullies and beds of grass. I followed the rod tip with my eyes, swaying slowly atop the leaves of the young trees and massive reeds, unhurriedly moving deeper in to the brush. It was the old woman working her way home. These outings end, returning you to your normal rhythms of life whether you’re ready or not. Hopefully, you go home with a renewed passion to do the normal and mundane. Most of us won’t pick up our lives and make a go of living in Montana. Most of us probably shouldn’t. But as I reflected on the elk and the old woman, I felt an unrest and a jealousy. They have embraced the last best place. They require very little except the land and the quiet. Slow moving, methodical, and deeply content. The old woman on the the trail that day had mentioned moving to Montana years back to get away from the people (she had moved from a town of 24,000 to be clear). Obviously a person would have to value solitude over a cell signal to live in that canyon. Does that make a person anti-social or relationally unhealthy? I have days when I think she is on to something. I suspect that I am like most people, and for my own sanity and my family’s well-being, I am better off passing through than calling it home. On the plane ride home, I felt drained. A trip like this is both an exhausting and recharging time away. 120+ fish to my 5-weight over the course of 4 days makes your shoulder sore in the best way, and your heart full. I boarded the flight home thankful for the beginning of new friendships and the memories of the fish, the old woman, and the elk. Like small treasures, they can come home with me. 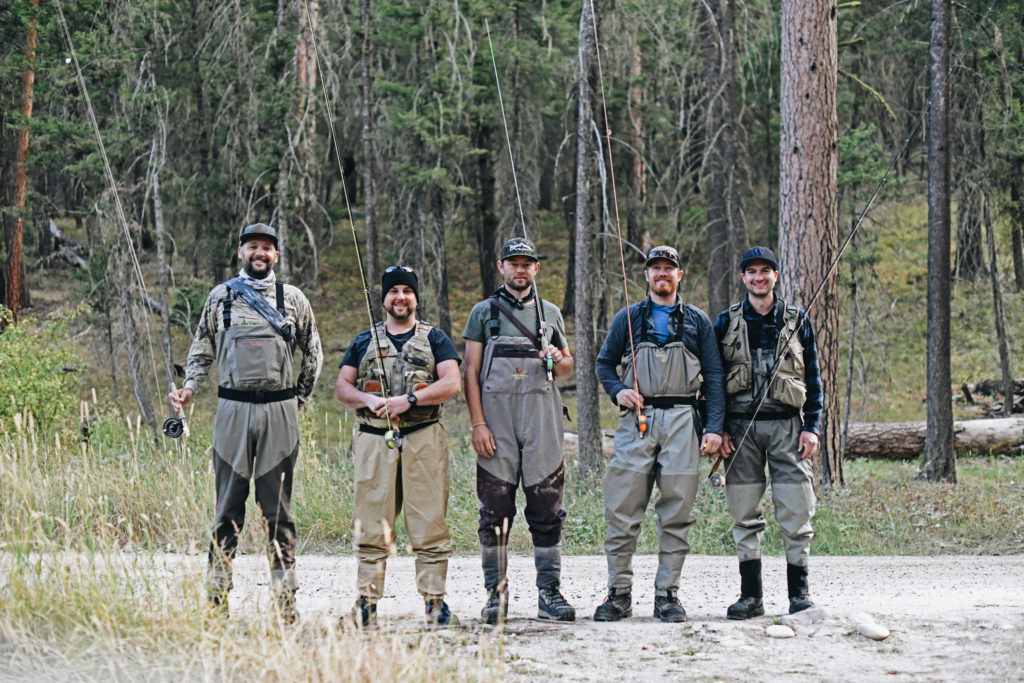 4 old friends and a tag-along.

One thought on “Treasures”