Every gainfully employed man or woman with a family who has contracted the incurable disease of fly-fishing knows a few cardinal truths:

Fishing for most of us is inherently secondary. When the stars do align for a more ambitious outing, it can feel exhilarating. Will the intel, rig, and timing come together?

Last spring (it’s been a minute since I’ve posted, see rule #2) my wife gave a green light and it seemed as though the stars were lining up. A trusted fishing buddy here in the PNW informed me that my hall pass coincided with a prime window to rope a steelhead on the Olympic Peninsula.

Mostly because he’s just a generous guy, he then took it upon himself to convince me via text that I should attempt this “program” solo. I told my wife I wouldn’t do that, being that the territory was unfamiliar and I didn’t have the right gear. I had never ventured to this part of the state, much less this particular river.

A few days later, a small cardboard box arrived on our porch, containing two fully rigged tippet set-ups ready to attach to my flyline, clearly meant for the Olympic Peninsula. The next evening, I get a text on the drive to work:

“Have you checked the flows? They are perrrrrrrrrrfect…”

I pulled up the USGS site, and saw that the water levels were dropping aggressively; the exact conditions he had said were ideal for a trip like this. 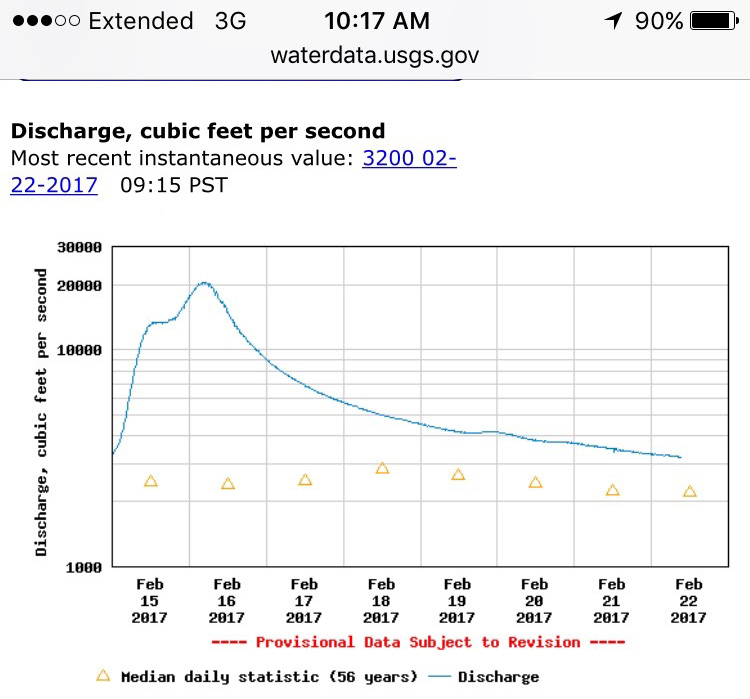 He then sent a small college essay over text, giving me landmarks, GPS coordinates, methods, warnings, and detailed instructions. I read every word three of four times. A combination of familiarity with rule #1 above (if you can go, you have to go) and confidence in my digital sherpa led me to reverse my decision: I’m going solo. 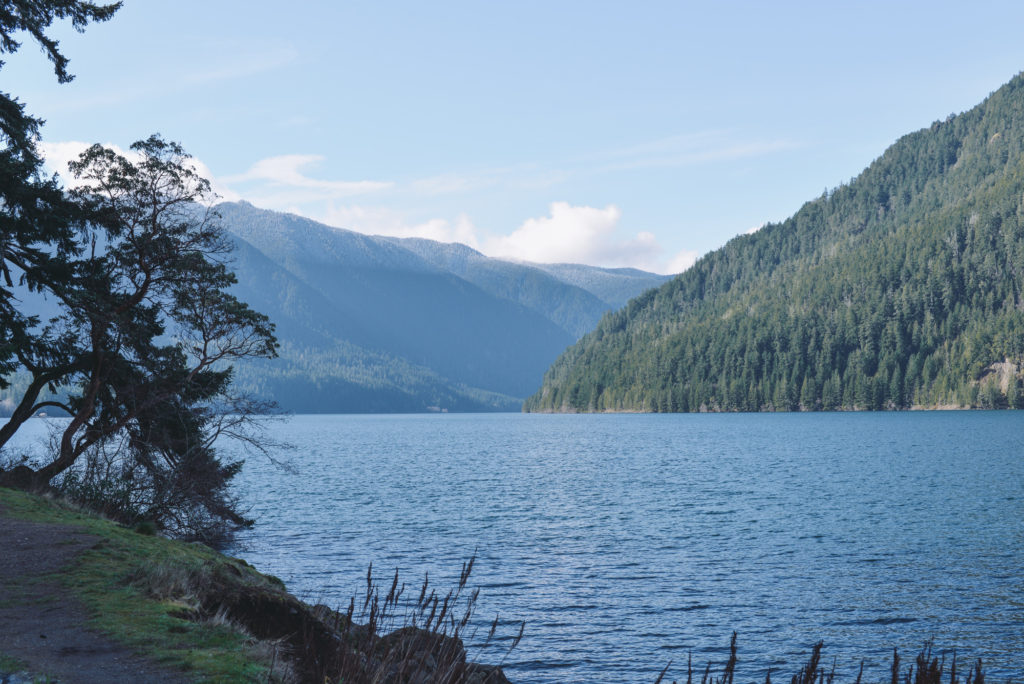 The four hours in the car was the opening act, a foretaste of the stunning visual beauty of the coastal rain forest. Lake Crescent, pictured above, butts up against the 101 for a stretch and is just another picturesque gem in Washington. 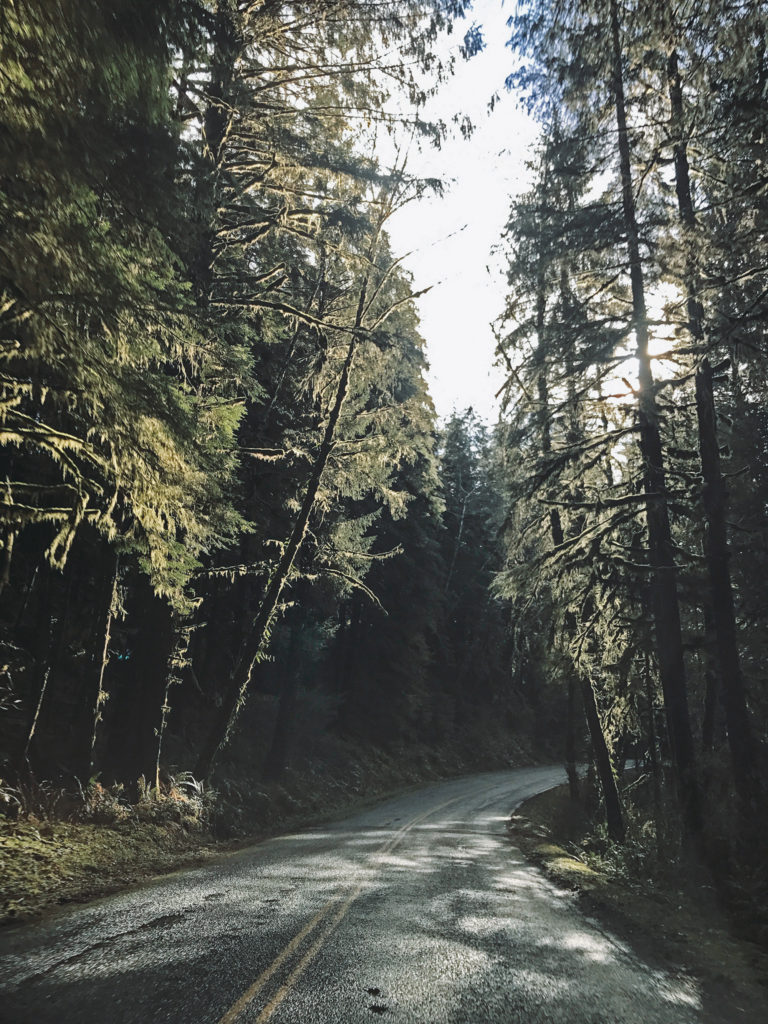 Following my friend’s GPS coordinates, I found both the parking lot and the trail-head. A few hikers and nature enthusiasts were staging in the lot behind their Subarus and Jeeps. I started on the trail, and the reality hit me again that I was utterly dependent on a text thread for direction, safety, and adventure. 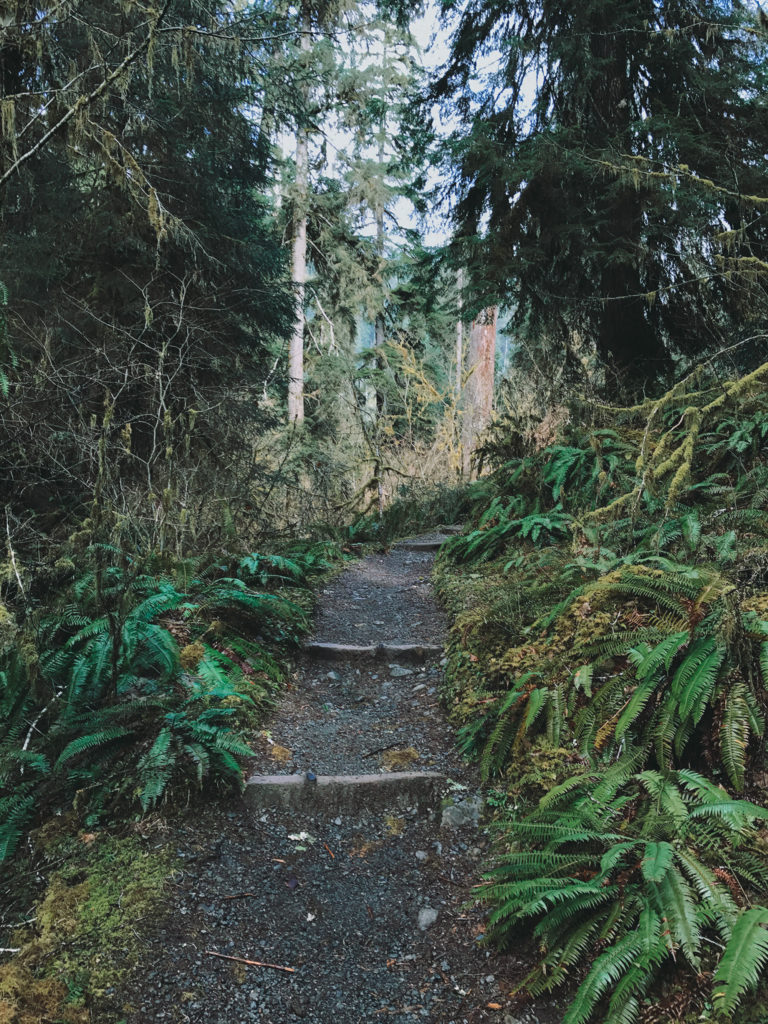 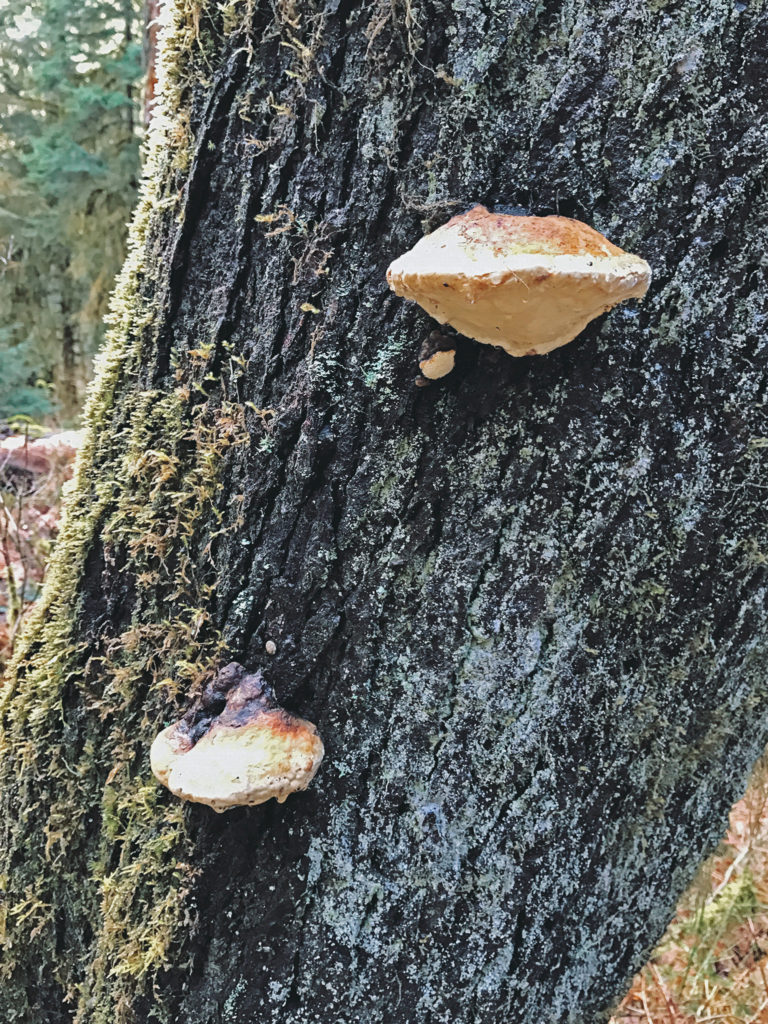 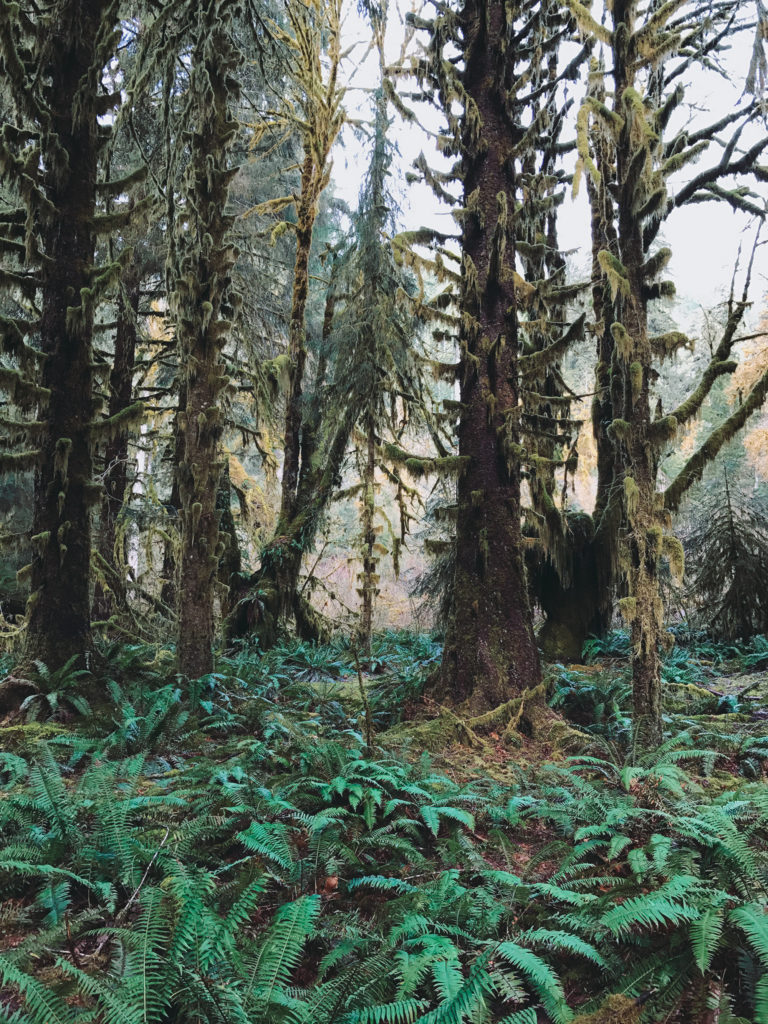 I can’t describe how breathtaking the forest was. It was as if a family of Ewoks would scurry across the trail at any moment. The air was jarringly fresh and damp, but not stale or musky. Every scented candle and fragranced cleaning product is trying to capture this forest, and they have all failed miserably. I hiked in a couple of miles and eventually decided it was time to try to intersect with the river.

I don’t know if I ever been so simultaneously wary and enlivened. I found myself constantly just looking around trying to take it all in.

The first fishable run I found was magazine worthy. I could see a subtle drop starting halfway across the river signaled by a brightening turquoise hue on the surface. The water was clear and not particularly deep (compared to what I was accustomed to wading) but the speed of the water pushed forcefully around my boots and legs. Acknowledging that the river was in charge, I tread carefully out towards the drop. I worked the closest seam and worked my casts incrementally towards the opposite bank. Nothing for several minutes, and then a bump so subtle I figured I had either imagined it or that my out-of-practice hands had forgotten what to do. 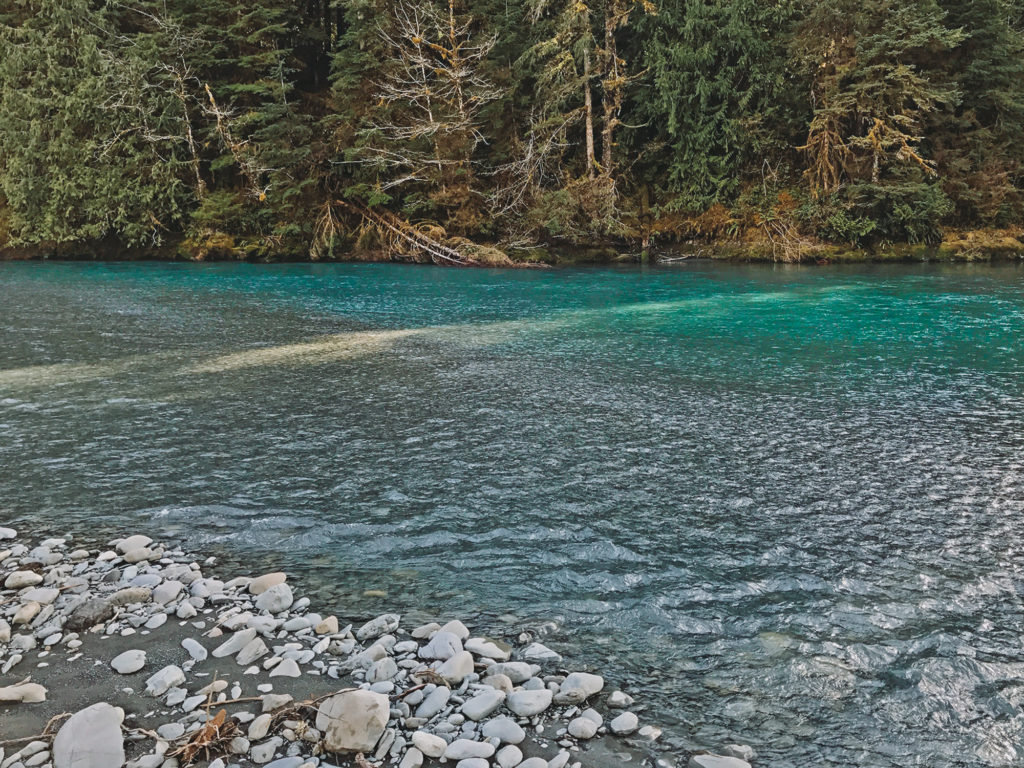 I ended up methodically and uneventfully covering miles of water. On the opposite side of the river lay a massive forest that seldom sees the footprint of man. Staring at it left me with a tingle of anxiety. Any predator could surely close the ground from the treeline to my position faster than I could get across to safety. My head was on a swivel. Working my way deeper into the park I noticed clouds moving in low and fast. In a dozen drifts, the weather had changed dramatically. 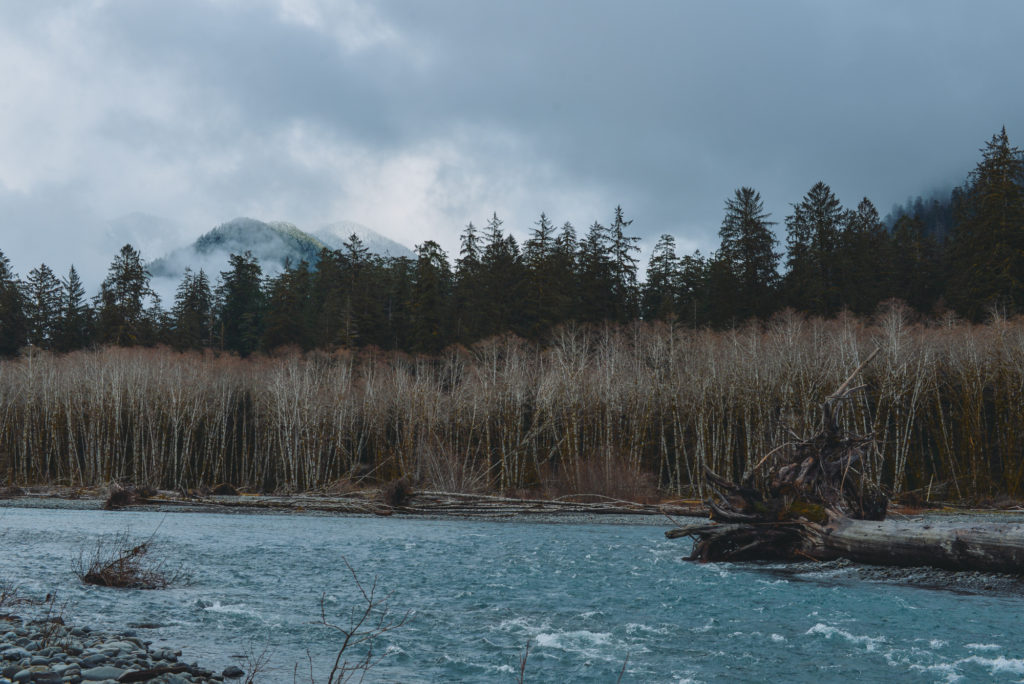 Over the next hour I was pelted with torrential rain, sleet, hailstones, and slushy snow. In my head I was rehearsing all the scenarios in which this excursion turned tragic: bear attacking on the shore, flash flood while wading, park closing due to inclement weather trapping my vehicle on the wrong side of the gate and 30 miles from civilization, lightning striking my rod, etc. 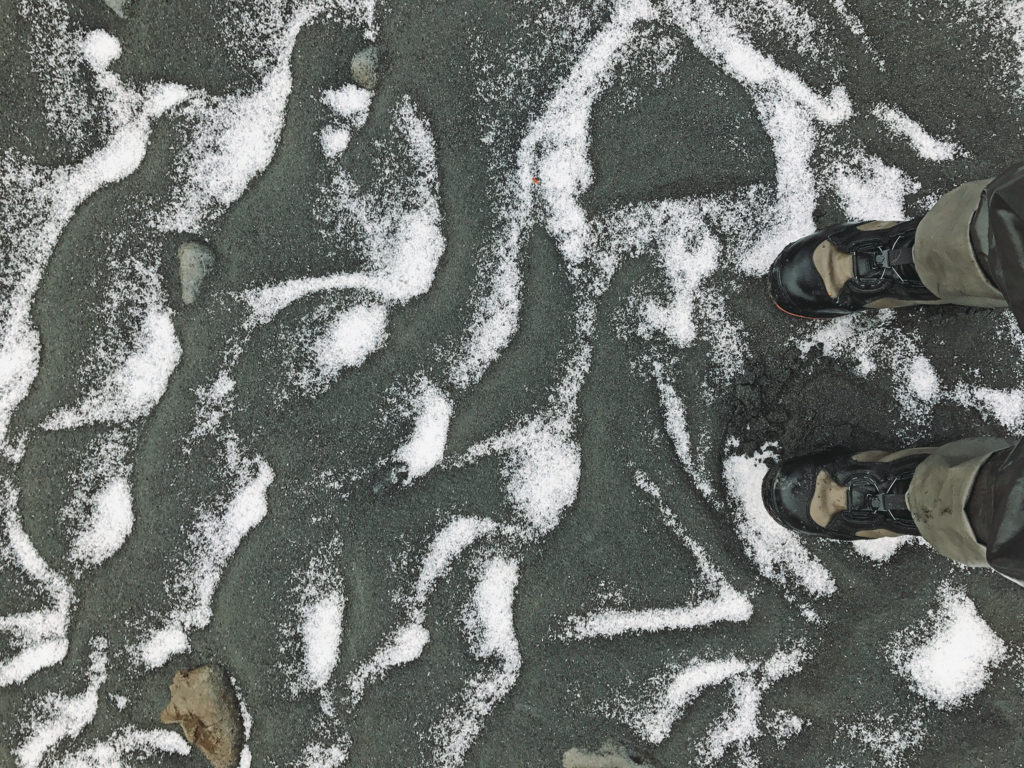 Most people in my life would have probably called it. I get that. But I had to ride this opportunity out. Steelhead were at my feet and I had to find one. I managed to find some very trouty looking water and on my first drift, saw a flash rip through the foam on the seam’s edge. A second drift turned up the first bull trout of my life. 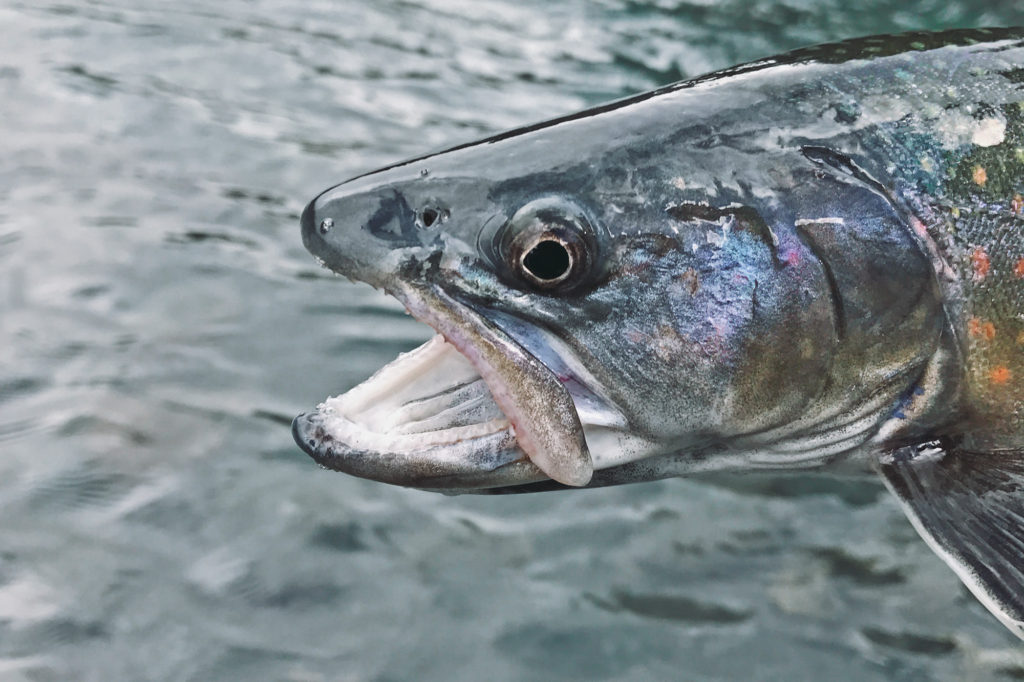 As the weather worsened and my layers began to forfeit, I had a surge of foreboding I couldn’t shake and reversed course towards the distant parking lot. I could already hear the whispers of disappointment. All the preparation, driving, and mental gymnastics hadn’t yet led me to the treasure I sought. My pace quickened as I retreat, and the unfamiliarity of the area came to a sharpened edge. “I need to get out now.” Finding a way back down the nearer bank turned into a literal maze multiple times; clearings would dead-end into unpassable brush forcing me to double back. In twice the time and with a doubled heart-rate, I finally made it back to my starting point, where the trail made contact with the water. In a move of desperation that felt like a MMA fighter’s jab after the bell, I tried the original turquoise blue run.

At the moment I planted my feet and began my drifts over the turquoise drop, the weather shifted again, this time favorably. With patches of blue sky peeking out over me, I began the same sequential coverage of the water. I kept staring at the drop. It looked so fishy…like a luxury condo for every steelhead in the nearest mile of river. With every empty drift, I dreaded the hike out even more.

Then, in the rushing center of the run, my line stopped.

Arching my back, I hauled backwards. Then again, bending the rod to its limits. Nothing. As if this cake needed icing, I manage to find the only submerged branch in a river relatively free of debris. I had taken two steps towards the drop to attempt freeing my line when the “branch” tore off downstream faster than any trout I’ve ever been connected to.

What proceeded will haunt me until my mind loses its elasticity to recall such things.

With 50 yards of fast water both in front, and behind me, I quickly assessed my position. It was official: I’m an idiot. I had managed to fish from the worst possible position in the river. It was too late for self-loathing.

The river narrowed by 30% just downstream of me, which means that all the water passing me was accelerating to accommodate a narrower channel. I stood no chance of fighting whatever was on the end of this line in my current position, so as line kept screaming off my reel, I stumbled over freestones to the bank behind and downstream of me. I couldn’t move fast enough.

By the time I made it to the shallows to clumsily run downstream I was almost to my backing. I’d fight it up the river a bit, run down a bit, reel some slack, and repeat…all trying to close the gap. The occasional breach visually confirmed for me what the massive headshakes had indicated: this was the fish of my lifetime.

“Get out of the fast stuff…Get. Out.”

It was working. The gap was closing. Suddenly, the resistance was gone and I could see the line heading straight at me. I stripped line as fast as I could. He kept coming. I kept stripping. In preparation for our face-to-face, I unhooked my trout net off my back. My trout net.

The fish slowed, inching upstream at this point. I realized in this moment that my heart was beating so hard, I could hear my pulse in my head. It continued moving closer, from directly downstream of me. “It feels soooo heavy.”

It was a steelhead alright. Time stopped. I had never seen anything like it in person. Where I expected to see a tail, I saw a dorsal fin. It was holding its position, but the physics of this final stage prevented me from doing anything about the remaining ten feet. I tried stepping forward or sidways but the current carried him further away. I reeled in as far as I could but even pointing my rod directly away from the fish yielded no movement. It was an impasse. After the longest minute of my life, he turned sideways and yielded to the current, moving away from me and slowly peeling line off my reel again. I worked him all the way back to our stalemate position, with the same results. Again I could see his whole body in the crystal waters. I had the fish of my dreams in front of me and no means of landing it. I needed a partner, a river dog, a helicopter…something.

Again he rested and let the current carry him downstream, but this time he made it to roaring currents below where the river funneled down. A shake. A run. And then nothing. 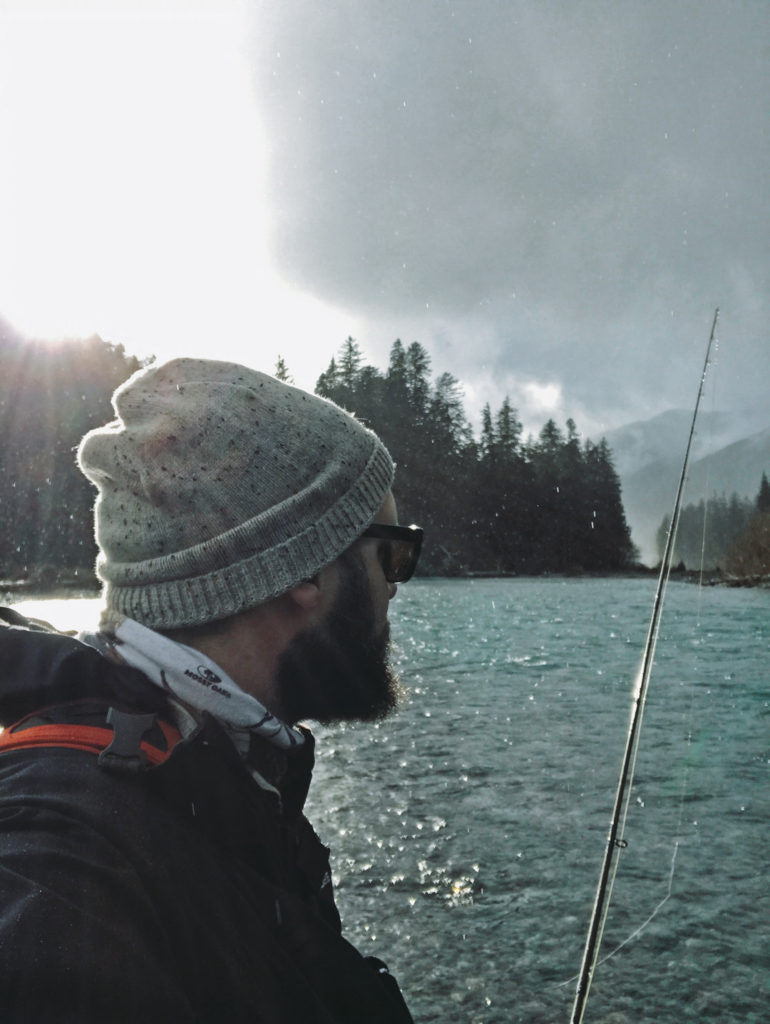 I stood there motionless for a long time. The snow and rain began to fall again, and a vibrant rainbow appeared down the river. I’ve never hated a rainbow so much in my whole life. I felt like a witness at the scene of a car accident trying to remember what color the car was that sped away. It all happened so fast. Every ounce of adrenaline was now coursing through me. I felt exhausted and wobbly. It was time to hike out. 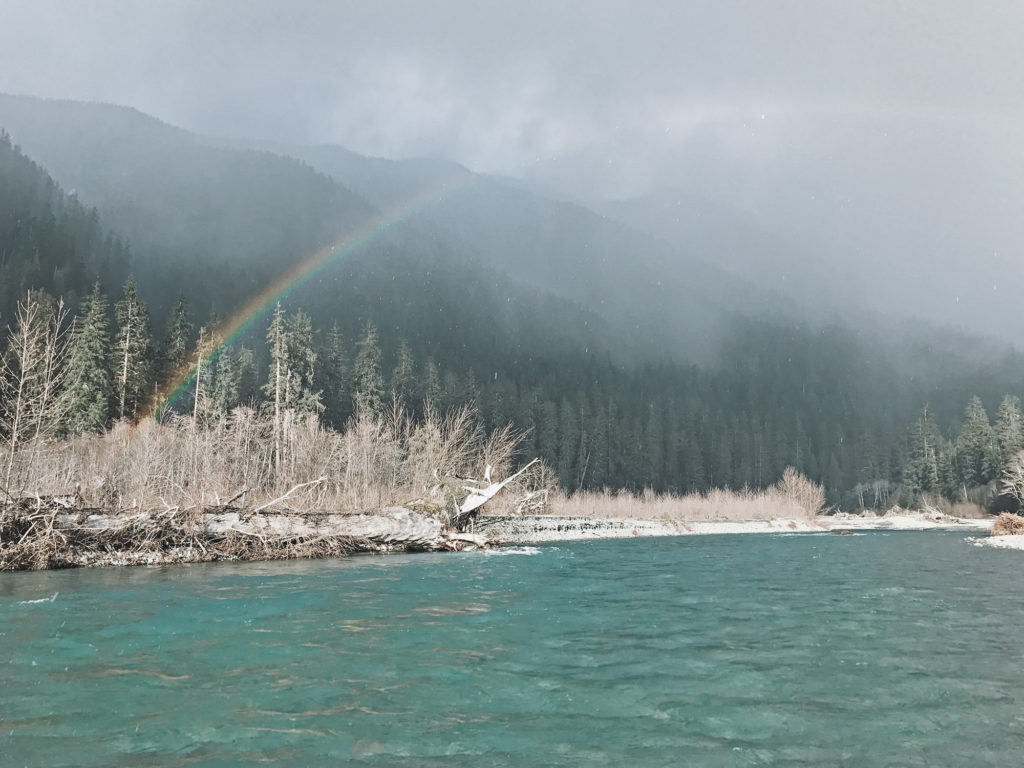 Undressing on my tailgate, I realized that I was ravenously hungry. I began the drive back into the tiny town of Forks (of Twilight fame). Alone in the corner of that diner, I must have looked like a man who failed the audition, bombed the job interview, and had been broken up with. It felt like that was all true. 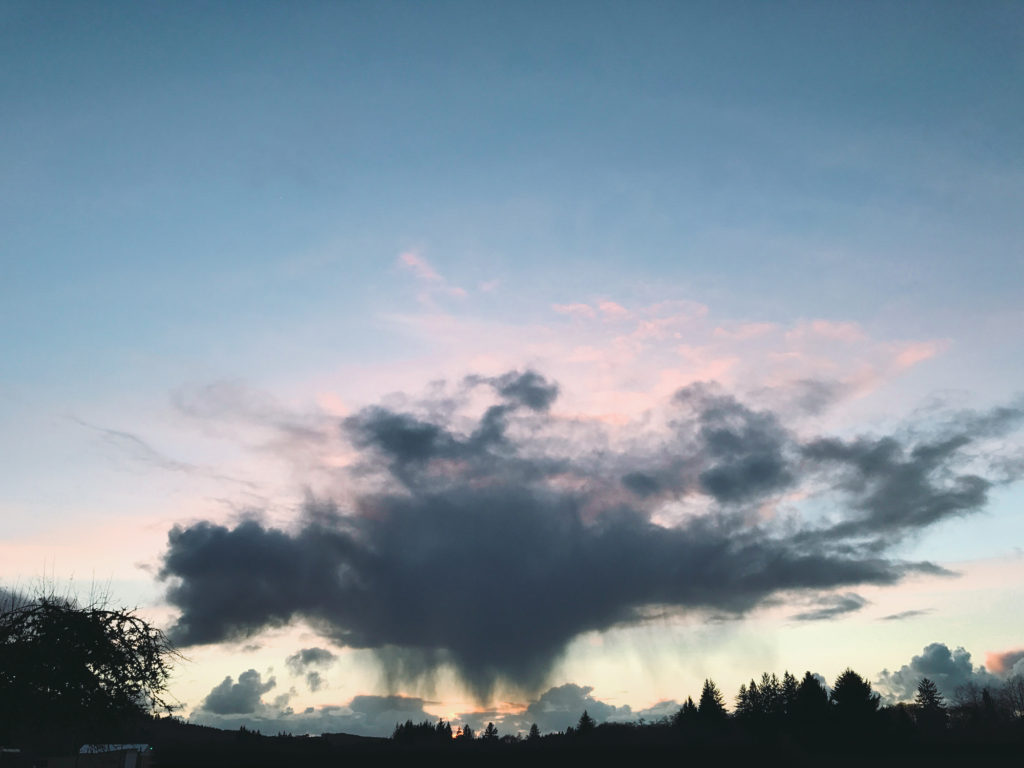 As I head back to my car after dinner, I stopped in the diner’s gravel lot. Looking across the Forks airfield, the sky was swirling in blues and pinks. The detailed replay of my encounter began it’s first lap around my mind for what would be a marathon lasting a few days. I had the right intel, rig, and timing. All the pieces were there. Yet there would be no silvery steel for me this trip.

Would I have been ecstatic over my first steelhead on the fly and the fish of my life? Of course. But you can’t go back. Life offers no re-dos. Sometimes you get the chance to take a second crack at something, but it never full erases the failed first attempt. This is probably for the best, because without the lessons of my first trip, I’d probably approach my next one the same way. I’ll be back to try to close the gap again, but it might be a while before I do.